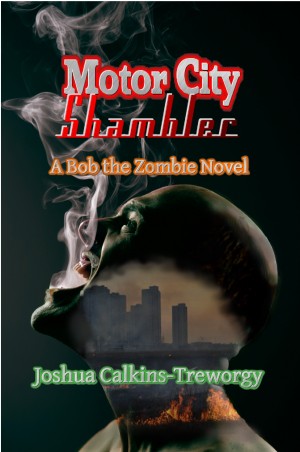 By Joshua Calkins-Treworgy
Rated 5.00/5 based on 1 reviews
Robert Johnson was out for a hike when a stranger ran up and bit a chunk out of his arm. It's a strange behavior, but Johnson patches himself up as best he can and heads for home--Detroit. When he wakes up, he sees the news--there's a weird infection out there, an infection that comes to be known as zombies.

My name is Joshua T. Calkins-Treworgy. I'm a 26 year old father of 2 beautiful little girls in Eden, New York State. I'm a new author, and intend to make writing my career, so that my wife won't have to work so much, and I won't have to work in the work-a-day world forever. Also because I love storytelling. My writing is in the realm of high fantasy, a genre for which I have a deep love. I've been reading fantasy and sci-fi novels for years, and among my favorite authors are Stephen R. Donaldson (the Covenant novels), Terry Brooks, Terry Pratchett, J.R.R. Tolkien, and Terry Goodkind. R.A. Salvatore's okay, but I'm not so big on him. I also enjoy the writings of Stephen King, Clive Barker (the old stuff), and Dean Koontz. I'm big on video games, particularly RPGs (role playing games). This stems in part from a long-lived love of pen-and-paper role playing games, like Dungeons and Dragons. In short, I'm a huge nerd. In addition, I'm also a huge Otaku, or anime/manga freak. (Inuyasha is my favorite, along with Negima: Magister Magi Negi, and Bleach)

Review
Angela Verdenius reviewed on June 20, 2011
(no rating)
When I first bought this book, I didn't quite know what to expect. I love zombies (zombies rule, yay!), but have never read one from the POV of the zombie. I loved this story so much, I've just bought the next in the series. It was funny, interesting, and I never quite knew what was going to happen next. One minute I liked Bob, the next I was horrified at something he'd done! Thanks for a great read, Johsua.

(reviewed 11 days after purchase)
livinngenzyme reviewed on May 1, 2011

One of the best zombie novels I have read. Couldn't put it down. The sequel is even better. Can't wait for the 3rd installment.

You have subscribed to alerts for Joshua Calkins-Treworgy.

You have been added to Joshua Calkins-Treworgy's favorite list.

You can also sign-up to receive email notifications whenever Joshua Calkins-Treworgy releases a new book.