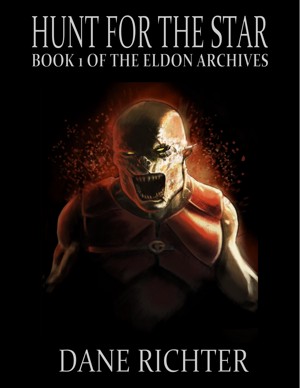 Hunt for the Star

By Dane Richter
Hunt for the Star is about treachery, betrayal, lost hope, broken dreams and fear. The brave unite to survive as the war of Edoria begins. Artos Hestrom must find the Eldon Star before the evil sorcerer, Ruehl. Will his men be ready? More
If you lie and deceive others to help you save the world, are your actions still considered noble?

Edoria is at war. Artos Hestrom retreats back to his home town of Corsin where he is given the task to retrieve a powerful crystal called the Eldon Star. The ageing Artos uses deceit and lies to procure people to help him on the journey and the plight from a half-man, half-elf called Chet, provides the perfect cover.

Ruehl’s stranglehold on the land tightens as he relentlessly pursues leads on the Eldon Star. Hordes of the vile Kròkos spread terror in cities and are lead to war by the dreaded black knight.

Time is of the essence as the forces of good and evil race towards finding the Star. Artos’ nephew, Ethan, volunteers to join the mission without knowing Artos’ true motives. However, Ethan’s death has been foreseen in a vision. Knowing that Ethan would certainly die if he is included on the journey, Artos must choose between the fate of his family and the fate of the world.

Born in 1981, Dane Richter spent his early life growing up on a farm located about an hour east of Perth, Western Australia. A love of Enid Blyton’s works first introduced him to the world of fantasy and adventure and with time, shifted to works by Tolkien, Feist and Tad Williams which opened a wider spectrum of the fantasy genre.
Although a deep-seeded passion for adventure and storytelling existed, during his high school years he had an aptitude for sport, excelling at track and field. Quickly rising up the ranks of Australia’s elite, he represented Australia in high jump at the IAAF World Junior Championships in 2000. He continued athletics for over a decade with personal bests of 2.19m in the high jump and 50.46s in the 400m hurdles and although he won numerous Australian national medals, a career dogged by injury saw him missing out on the 2002, 2006 and 2010 Commonwealth Games.
Writing was a passion for Dane throughout his track and field career, beginning in 1999 and finishing the first draft of Hunt for the Star in 2003. With education and sport a primary focus, time afforded to writing was limited. Dane honed his skill over the next few years with affiliations to Tom Collins Writers House and the Speculative fiction group KSP Writers centre, whilst penning a sequel, Rise of the Deceiver.
Dane completed a Bachelor degree in Commerce majoring in Accounting and Marketing in 2003 and worked in coaching and education over the next ten years with a brief stint as a freelance writer in 2006, publishing 23 articles as a sports writer for the Perth metro and country based paper, Community News Group.
In 2011 Dane was introduced to Hal Colebatch - a contributing author to Larry Niven’s military sci-fi series, The Man-Kzin Wars. With Hal’s mentoring, Dane got his start with a small independent press who published the paperback version of Hunt for the Star in 2012. In 2013 Dane released the ebook, which is available on Amazon.

You have subscribed to alerts for Dane Richter.

You have been added to Dane Richter's favorite list.

You can also sign-up to receive email notifications whenever Dane Richter releases a new book.