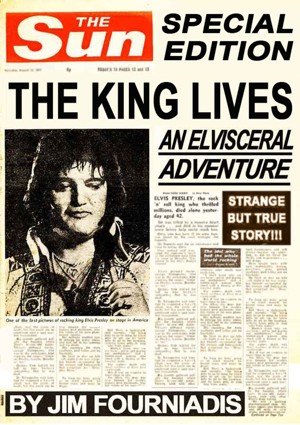 The King Lives: an Elvisceral Adventure

By Jim Fourniadis
It's a gruesome laugh riot when the worm eaten, zombie corpse of Elvis Presley escapes its Meditation Garden resting place and wreaks havoc on the quiet town of Memphis. More
A strange solar episode is the flimsy excuse for the dark storm that squirts the restless , zombiefied corpse of Elvis Presley out of his grave.

And woe be to those who have disturbed his slumber all these long years.

Meanwhile young Luke Purvis, an Elvis medium who claims to contact the spirit of the king suddenly comes face to face with the man he has spent so many years invoking.

Jim Fourniadis is just a kid from Jersey who ended up in San Francisco. For nearly two decades he fronted notoriously silly punk band Rats of Unusual Size and has written two musicals, The Wicker Man and Lovesick. Somehow he managed to open up a small black box theater in the Mission called the Dark Room where he writes and directs plays several times a year, when he's not busy emptying garbage cans.

Review
Stephen Tunney reviewed on July 11, 2013
(no rating)
The King Lives: An Elvisceral Adventure by Jim Fourniadis, a fast, furious and hilarious novel of Elvis rising from the grave to confront not only himself, but his place in American culture. It’s also a gem of horror literature and social commentary. It takes our current media fascination with zombies (2013 being the year I suppose the concept of zombies has reached its full cultural saturation) and brilliantly mixes it up with the never ending spectacle of Elvis Presley fetishization. The action takes place in Graceland, home of the king, and the surrounding environs of Memphis, Tennessee. The reasons for Elvis’s return are delightfully silly, as was the original explanation of the zombie apocalypse in “Night of the Living Dead.” Elvis walks the grounds of Graceland, along with various locals of Memphis. He kills. He stumbles upon crowds of Elvis impersonators, all there for an Elvis impersonator convention. He kills again. Them specifically. I found myself rooting for the old corpse of course...

The novel is full of memorable characters and it reads like a fast moving dream through a landscape of Elvis iconographic imagery--from the endless versions of different impersonators right down to the Elvis trinkets sold in the Graceland gift shop. It is wildly cinematic, and not in our current CGI graphics sense, but more in the moody deadpan black and white imagery of 50’s horror and sci-fi. Imagine if George Romero were to direct Jailhouse Rock and he decided to make it into a horror-comedy, and you get the picture. And Elvis the Zombie has more to do with the Boris Karloff Frankenstein Monster than the Walking Dead--he’s a killer, but he’s no flesh-eater. In fact, he’s the Frankenstein of our cultural obsession, returned from the dead, still dead and literally falling apart, but full of wrath for his impersonators and those who make profit on his image.

I wont give anything away but there are some truly excellent scenes, especially one involving a hotel lobby, a fountain, a parade of ducks, Elvis vs the house detective. Elvis Paisley and his confrontation with “Monster Elvis”. There is also an engaging plot twist where the main protagonist, Luke, has a Philip K. Dick like Elvis encounter in an alternative universe where...OK, I won’t give it away, you’ll just have to read it for yourself.

Elvis Presley is fair game, but that’s not his fault--long before the man died, he was already a fetish in the iconic sense. And the phenomena of Elvis impersonators only solidifies the melting of boundaries between what is real and what is projected. That the uber-successful artist who ceases to live as a human being, continues to live nevertheless, not just through his or her recordings or artistic achievements, but also in the “undead” fetish sense, as a product, as endless trinkets in gift stores, as a person in costume engaged in impersonation, as an undying cultural phantasm. A zombie, in fact. Who cannot die because he is already dead, or in a consumer society such as ours, who cannot die as long as someone is making money off him.

You will love The King Lives: An Elvisceral Adventure if you love Elvis, and you will also love this book if you hate him. Buy it, download it and read it today. It’s engaging, intelligent, funny and thought-provoking and it’s damn hard to put down. This might be the first work in the Zombie realm since the original Dawn of the Dead that makes a courageous stab at a modern consumer culture that turns us all into the living dead.

(reviewed 4 months after purchase)
Timothy Kay reviewed on July 2, 2013
(no rating)
This book is a hoot. A highlight is the oddball cast of characters, with appearances by every variation of Elvis impersonator. This is a Memphis where everyone's lives have been touched by the late Presley, and all those lives are changed when the body of Elvis himself crawls his way out of the grave.

Things get wild from there. The story flips through characters and events at a quick pace and keeps new strange turns coming. One of my favorite chapters has the grumpy old dog narrating his own perspective on events.

There's a bunch of references to famous Elvis songs and jokes about events in his life. The story pays tribute to the glory of the King in his prime, his long decline and the complex legacy for the people he left behind. It's also got deadly Elvis on Elvis violence.

You have subscribed to alerts for Jim Fourniadis.

You have been added to Jim Fourniadis's favorite list.

You can also sign-up to receive email notifications whenever Jim Fourniadis releases a new book.