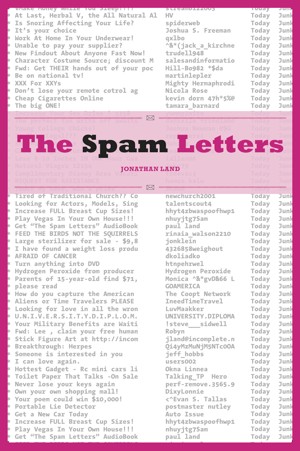 Featured in Entertainment Weekly, The New York Times, and Slashdot - a collection of brilliant and entertaining correspondence with the people who send out spam. Compiled from the nearly 200 entries written by Jonathan Land, The Spam Letters taunts, prods, and parodies the faceless salespeople in your inbox, giving you a chuckle at their expense. If you hate spam, you'll love The Spam Letters.

Jonathan Land has worn out many hats and much welcome over the years. He grew up in New York City and could frequently be found at ungodly hours of his formative high school period at either WBAI-FM as an Arts Department producer, composer, and timid on-air personality or at CBGBs as your garden variety delinquent teen.

Jonathan Land graduated from Hampshire College in 1997, majoring in the highly unprofitable fields of mathematics and music. He's incorporated both into an overly ambitious 4.5 hour composition on the net which has sadly been burned. He's spent the intervening time as a web developer, a stick figure artist (not a joke, see http://incomplete.net/ for details), and a member of the experimental musical group Negativland, which specializes in making art that goofs on the media whenever possible. He's made appearances on an E.P. with one-hit wonders (in America, at least) Chumbawamba, and on a compilation of reworked pieces from Fiddler on the Roof for Knitting Factory Works records.

Jonathan Land currently resides in Northern New Jersey with his wife and infant twin daughters. He currently receives about 30-50 spams a day and would be the wealthiest man in Nigeria if only he could manage to take his business transactions seriously.

You have subscribed to alerts for Jonathan Land.

You have been added to Jonathan Land's favorite list.

You can also sign-up to receive email notifications whenever Jonathan Land releases a new book.