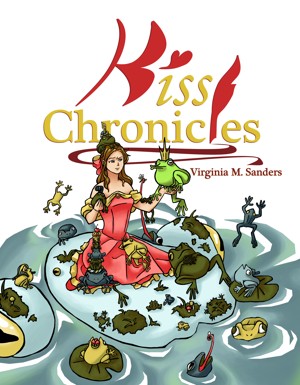 In this quirky memoir, I share details from my life, exploring exactly how it was that I came to a kissless crossroads at age 30, and I tell all about the exciting and challenging experiences I faced as I developed the Kiss Chronicles project.

Virginia's tale of a trying yet thrilling trek through the intricacies of life and love is wonderfully inviting. Her narration pulls you into the story and never lets go. The manner in which she seamlessly sews the delightful vignettes enhance not only her story, but the guest authors' as well. This memoir and its author are stupendous.

Quite literally, Virginia makes herself an open book. She fearlessly invites us into her unique life's story, knowing full well that some may scorn her modern-day trial-by-ordeal to unravel the mysteries of an intimate relationship with another member of humanity. However, most of us will see a bit of ourselves in her story, and that's what makes it special. She sensitively discloses through her narrative what many of us are not courageous enough to admit to ourselves.

Give it a read. You won't regret it.

Open, honest story by an incredible woman! I laughed, cried, and connected with the author as she shared her journey seeking for that first, magical moment we all long for. Kept me up all night and it was worth the extra coffee I needed the next day to function.

It will truly make you think about your relationships and missed opportunities.

She shares with us her story as she takes decisive action by planning to auction off her first kiss for charity. As she attempts to put her plan into action she faces many unexpected glitches that leave you wondering if she will ever have that first kiss.

_Kiss Chronicles_ is a fairy tale, made all the more interesting by the fact that it’s a true story. In this tale, our princess, Virginia Sanders, sets out in search of her *first kiss* — an unusual quest for a thirty-year-old woman.

After three kissless decades, she decided that waiting for the right man to come along wasn’t enough anymore. Instead, she would use her first kiss to do some good by auctioning it off to raise money for charity. It sounded simple enough, but as she got deeper and deeper into the process, it became a quest of a larger scale.

Kiss Chronicles is the story of Virginia’s quest, from the first steps, through a wilderness of setbacks, characters, and personal discovery, to the publication of _Kiss Chronicles_ itself. The she set out with one goal in mind, time and turmoil transformed that goal into something different, so that the success she found wasn’t the type of success she planned for.

You won’t find a story like this anywhere else.

I loved this book. Ms. Sanders tells an honest and powerful story about her own experiences. Not many people would reveal so much about themselves to so many, but this author does. The concept behind this autobiography is original and highly interesting. It's clear that the author wanted to tell not only a personally meaningful story, but one that was often humorous as well. I highly recommend this book.

Reading this book, I was thoroughly entertained and charmed by the voice, the concept, and, ultimately, the story. So much of Virginia's personal experiences can be related to all of us (boys included!) even if you've never been kissed or you've kissed a lot. I highly recommend this to everyone, if not for the heartfelt snark, then for the brilliant story telling.

I also found the short stories quite entertaining. ;-)

One woman's personal and poignant journey to procure her first kiss. Seems simple enough right? Well, guess again. Kiss Chronicles is a quirky and thoroughly enjoyable read that features some wonderful vignettes on the pleasures and pitfalls of swapping spit.

I highly recommend it.

I'll admit, I've never been a fan of autobiographies. They've never appealed to me. I can honestly say I've never finished a single one. Until now.

I absolutely love how this book was written - like the author was talking to me, personally; telling me her story like two close friends would over a cup of coffee or a tub of ice cream. It was easy to read, and hard to put down - almost like trying to leave in the middle of someone telling you something interesting. That's exactly what this story is: Interesting.

There wasn't a part of this story I didn't enjoy - the ups or the downs. It didn't go how I expected it to, but still ended leaving me feeling really satisfied. I really felt myself feeling throughout the book - anger at the people who... well, sucked. Sadness, for reasons best left unsaid otherwise it would spoil it for those who have yet to read it. Happiness for all of the things that worked out. And overall, content. The author's feelings really shined through her words, even if they weren't always spelled out.

I would recommend it to anyone, there's a lot to be said for this book, and I wish I had the right words for it. It's just overall an amazing literary experience.

Virginia weaves a tapestry of charming vignettes and unexpected journeys, tales from herself and other authors wrapped around the central thread of her own life story. She handles deeply personal and sometimes tragic subjects with a playful sense of humor and a profound sense of peace.

Overall a fun and uplifting work written for a great cause. I recommend it to anyone who loves a good story and hates cancer.

You have subscribed to alerts for Virginia M. Sanders.

You have been added to Virginia M. Sanders's favorite list.

You can also sign-up to receive email notifications whenever Virginia M. Sanders releases a new book.