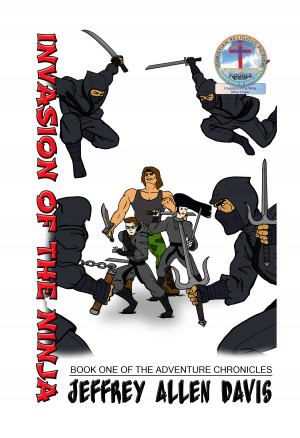 Invasion of the Ninja

By Jeffrey Allen Davis
Rated 4.00/5 based on 6 reviews
A team of teenage martial artists defends a Southern Missouri school from an invading ninja army. More
Jamie and Yoshi are late twentieth century members of the Funakoshi ninja clan who were trained by Yoshi’s uncle, Tanemura Funakoshi. When the Waruiyatsu, a sinister clan with an ancient grudge, attack Jamie’s high school and hold his classmates hostage in an effort to bring Tanemura and his two students into the open, Jamie and his clan sister are forced to attempt a rescue.

Going along are a close group of friends, each with his own interest in the fighting arts. From Dave, whose muscle-bound frame and love of a good scuffle are overshadowed by his cheerful personality and kind heart, to Buster, whose Bible is his greatest weapon, each of their friends has a loyalty to them and each other that is stronger than the Waruiyatsu can ever fathom.
Download: epub mobi (Kindle) pdf more Online Reader
rtf lrf pdb txt
Price: Free! USD
Add to Library
Create Widget
Tags: martial arts karate ninja tae kwon do taekwondo ninjas martial art ninja fighting ninja vs ninja ninja story martial arts fiction martial artist
About Jeffrey Allen Davis

Jeffrey Allen Davis writes from a suburb of St. Louis, MO, where he lives with his wife Vickie, two step-children Jayson and Breeanna (yes that's really the spelling of her names), and his daughter Kaitlyn (part-time). An ordained minister, Davis’s writing tends to take place within a Christian worldview, even if the story isn’t overtly religious.

Davis spends his time watching Christian and martial arts movies, hanging out with his family, studying the Word, and contemplating the joy of Reformed Theology.

In his day job, Davis works as a loyalty travel agent. He is slowly learning the industry and has finally gotten most of the airport codes committed to memory.

He is also a very political person who enjoys discussing his conservative views. On top of that, he will gripe--to anyone who will listen--about how Marvel Comics ruined Spider-Man by ret-conning his marriage to Mary Jane. That and how Wizards of the Coast ruined D&D with the 4th edition of the game.

Book Trailer for "Invasion of the Ninja"
A radio newscast, presented by Del King, about the hostage situation in Sera High School.

Also in Series: The Adventure Chronicles

Not your typical action-packed YA novel. A rare, enjoyable treat.

An intriguing group of characters and lots of martial arts action, with a hint of romance thrown in for good measure, are what led me to devour this book in two sittings. (I would have read it in one go, but I started reading late on a work night.)
As for the Christian aspect, it's there to explain the characters' motivations, not to try to convert you. Don't let it deter you from enjoying this story, for enjoy it you will.

I erroneously assumed I’d be out of my element when I first started reading this book. I can't recall ever reading a ninja book and the number of young adult books I've read over the years can be counted on one hand. With a few fingers missing.

I was hooked after reading the first few pages and was entertained to the last page. As a writer, I know the challenge of writing a story with a modest page count to have in depth, well rounded characters. Jeffrey Allen Davis skillfully and expertly gave each of the characters enough "screen time" for the reader to get to know them as individuals, while merely hinting as some aspects of their backstory, hopefully to be saved for a later reveal.

I look forward to reading the second installment!

I really enjoyed this book. The action was good, the characters were very likable, and the ending was what I was hoping for! Jeffrey Davis writes well. He puts humor in all the right places, too. I saw the two star review here, and thought that was sad. If you don't want God involved in a book you're reading, fine. Don't read it! For me, it just made the book better! Its an integral part of this story, and obviously just as important to the tale as the martial arts aspect. It shaped the character's "character", making them who they are. Good job, Jeffrey!

A good "fluff" book, but I couldn't take it too seriously. For me God, and Christianity, came into it far too often in what is basically a martial arts story

When I was a kid, all cinema experience happened via television, because--for the most part--I lived in the middle of nowhere. During the early 1980s, I became entranced with the world of martial arts, and Saturday morning re-runs of the 1970s TV series, "Kung Fu", started that journey for me. Next was the mid-1980s TV series', "The Master", "Sidekicks", and then "Ohara", which continued to fuel part of my destiny. It wasn't until 1989, however, at age sixteen, that I graced a movie theatre (for the first time in my life) about thirty miles from my hometown, which just happened to be "The Karate Kid: Part III (a coincidence, yes), and by then I was already a 1st dan (degree) black belt in Tae Kwon Do.

Other than purchasing Black Belt Magazine throughout the 1980s on a regular basis, I never even remembered reading or seeing a fictional book about the martial arts--except for Chuck Norris' "The Secret of Inner Strength: My Story"--which was autobiographical, until I bought a copy of Jeffery Allen Davis' "Invasion of the Togakura", published in 2003.

Now, ten years later, the author has re-released his 80s-90s martial art tribute, re-titling it, "Invasion of the Ninja: Book One of the Adventure Chronicles", with a great deal more content, and in my opinion, superbly written. If you're looking for an action-packed story with lots of character depth, and an endless supply of ninja, then look no further.

You have subscribed to alerts for Jeffrey Allen Davis.

You have been added to Jeffrey Allen Davis's favorite list.

You can also sign-up to receive email notifications whenever Jeffrey Allen Davis releases a new book.