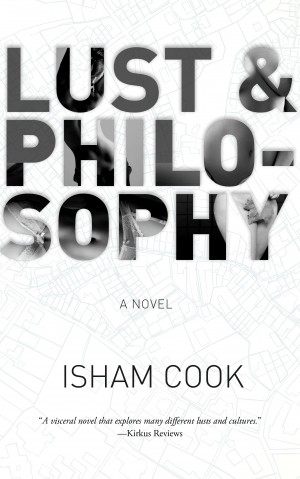 Rated 4.00/5 based on 2 reviews
A hypnotic journey of a novel, with idea bombs going off along the way, Lust & Philosophy is mind-rape as literature, a fairytale on acid, and a holographic Rorschach test all in one, and will appeal to fans of Hermann Hesse, Philip K. Dick, J. G. Ballard and other novelists of the uncanny. More
To track down Cookie, an elusive woman fleetingly glimpsed around his Beijing neighborhood, expat Isham Cook employs tips from Shakespeare's Romeo and Juliet, Simone Martini's painting of the Annunciation and Louis Althusser's Lenin and Philosophy. Meanwhile, Luna, a woman of flamboyant sexuality who invites her dinner guests into bed, assists Isham in the seduction of a third beauty of ambiguous Asiatic ethnicity, Adalat. But revelations from the philosopher of parody Jean Baudrillard begin to eat away at reality until Isham can no longer clearly distinguish Luna from Adalat or his own Caucasian identity from the Chinese.

A hypnotic journey of a novel, with idea bombs going off along the way, Lust & Philosophy is mind-rape as literature, a fairytale on acid, and a holographic Rorschach test all in one, and will appeal to fans of Hermann Hesse, Philip K. Dick, J. G. Ballard and other novelists of the uncanny.

"Lust & Philosophy's experimental prose and non-linear narrative spans continents, decades, and states of mind, calling to mind William S. Burroughs' equally bizarre Naked Lunch, while fans of Henry Miller will empathize with - but may not always like - the libertine expat Cook."—Shanghai Talk

"Into the bathroom with it, to be dipped into, as it were, at eagerly awaited moments."—Robert MacLean, author of Foreign Matter

"A visceral novel that explores many different lusts and cultures."--Kirkus Reviews

This novel flies out to the farthest reaches and then folds back in on itself. Lust and Philosophy is a tale disjointed in time, self-indulgent and sexually charged like the first generation of 20th century novels that fought obscenity laws. It claims to be a novel, but is no more a novel than Tropic of Cancer or Naked Lunch, even if equally enticing. As Naked Lunch drags a reader into the world of drug addiction, Lust and Philosophy thrusts a reader into a microcosm of sexual obsession. "Even if parts of it disgust you," Orwell might have said about this book instead of Tropic of Cancer, "it will stick in your memory." The Holy Ghost certainly does not reside within the inkwell of the author of Lust and Philosophy, nor cling to the quill of his pen

Preferring literary fiction, the author disdains "certain formulaic constraints geared to profitability (the first page that "grabs" you, the compelling storyline, heart-wrenching sympathetic characters, and the like)." So it should not be surprising that Lust and Philosophy is impossible to review for plot, character, narrative or theme in any usual way. It has no plot, the characters mostly are one-dimensional, the non-linear narrative is "to there and back again," and theme is really just preoccupation. Considered together with other non-novels, however, Lust and Philosophy holds its own as a literary essay ready to morph into a novel - when the author's not looking.

The narrator of Lust and Philosophy, called Isham, is an expatriate American living in Beijing. A mandarin-speaking English teacher, with many young Chinese women as students, Isham is a Sinopath immersed in a milieu of simmering sexuality, constantly tempted by the provender surrounding him. Many if not most expat English teachers fastidiously avoid the temptation, some dally with willing students, but Isham emerges as an unrestrained libertine. At first glance, this looks like a classic teacher-student sexual predator tale emerging, but the women with whom Isham does become involved are never his students, and so it is likely that daily exposure to his female students merely keeps Isham on edge. Lust and Philosophy begins with an encounter in the street.

"Walking ahead of me was a woman with intensely voluptuous hips in tight faded jeans and jean jacket.... She gazed ahead oblivious of my glance. I continued on without looking back and dismissed the painful specter from my mind."

The allure of Cookie established, Isham muses over some of the other women he has known. He explains, "we try to connect when we meet people...find some common ground with a stranger. Perhaps you have nothing to go on but a liking of spicy food or a hatred of the president. The mutual attempt at simple human friendliness is often enough." This goes little distance to acquit Isham's mania for laying every arousing woman he encounters, or his sexual fetishes, which he describes at length with the brass of Durrell or Miller. Cookie becomes the elusive, unattainable apparition Isham stalks through the rest of the book.

Interleaved with recollections of the U. S. and China are ruminations about Shakespeare, the Bible, sexual assault, de Sade, Julie Andrews breasts (as exposed in the 1981 film S.O.B), social semiotics, sustainable agriculture, and more. Miller, also, placed little islands of essay in the middle of his sordid sea of sexuality - which many readers just skip over to get to the next sex scene.

Isham retells the version of Adam and Eve that we have from the Gnostic gospels, wherein the snake is Jesus, the apple is a psychedelic mushroom, Adam and Eve get high on the mushrooms and Red Lebanese hashish, taste the delights of sex, kill God, raze the wall of Eden and free all the animals. From these flawed progenitors was passed down the gene with a trait for ferocious sexual appetite that spawned generations of "mystery cults, secret phallic cabals, vagina-worshiping covens..." - and Isham.

In another aside, Isham suggests that the Annunciation as depicted in Simone Martini's was actually a rape (in contrast to the romantic way it was painted in the Middle Ages). Isham cites a description of this encounter found in a text by Hodge and Kress on Social Semiotics, an arcane theory of linguistics that looks at how textual meaning is interpreted. In Hodge and Kress, the spatial distance between Gabriel and Mary is examined to see what their body language says about the event, but in Isham's mind the event escalates. "Force is applied, resulting in a sharp reflex and cry. It hurts, but the seed is already implanted by the time Mary realizes what is going on...squirted all over with the 'cloud of dew' of God's semen." This leads to a convoluted discussion of the kinds and degrees of "rape." Social Semiotics may raise the tone of Isham's discussion, but these interpretations of Adam and Eve and the Annunciation still are not likely to win readers among Christian fundamentalists.

Isham enters a memory vortex and time swims back to drug-hazed memories of traveling in Europe and India, with Adalat (a Uyghur, we learn later). Luna barrels onto the stage - a lady with erotic genius - who becomes the best-rendered character in the story. Born in Africa to Chinese parents, Luna grew up outside the diaspora of Chinese sexual repression. She is a cornucopia of quirky ideas, and a succubus with insatiable lust - looney Luna. In one of Isham's first encounters with Luna, they meet in a Chinese coffee shop, where in a booth she slurps him to erection, leaps onto his lap, and uses her skill at pompoir to squeeze him to ejaculation and drench him in her rancid jissom - the ultimate wet dream, at least for the initiated. She gives him a dose of crotch crabs, too, and can't understand why he doesn't like her little pets.

Much later, finally settled in Beijing, in the present, Isham, Luna, and Adalat become a threesome who camp overnight west of the capital and along the Great Wall. On a final trip, Isham forces Adalat to have sex and, shortly after, he is confronted by vengeful Luna in a coffeehouse. Here the real warping of time begins, because the reader is led to believe the coffeehouse is in Chicago. Upset by Luna, Isham "lurched out of the coffeehouse and into a nightmare. I was no longer on Broadway but Guijie, Ghost Street, in Beijing. It was evening rather than morning." He stumbles into another coffeehouse, realizes his visa has expired, that he is in China illegally, and flees in a panic. On the street in Beijing, he steps on a loose manhole cover and, like Alice down the rabbit hole, falls through. Isham's time below the streets is no less hallucinogenic.

From this point, the narrative becomes taut and convoluted - the circle spins in the spiral and the wheel within the wheel, beginning and ending incessantly, images coursing through Isham's mind. Then, he sees her. Cookie.

"Walking ahead of me was a woman with intensely voluptuous hips in tight faded jeans and jean jacket.... She gazed ahead oblivious of my glance. I continued on without looking back and was about to dismiss the painful specter from my mind but then hesitated and slowed my pace."

The circular narrative of Lust and Philosophy is not as disjointed as Naked Lunch but, in the end, like Naked Lunch, it just stops. At the end of the book, Isham repeats nearly the same description that began the book, leaving the reader to wonder if the entire story has happened in only the moment it took Isham to decide whether to approach Cookie. After all his exploring, Isham arrives where he started. It's an ending like Finnegans Wake, returning to the beginning from the end:

riverrun, past Eve and Adam's...
A lone a last a loved a long the riverrun...

If you expect traditional linear narrative, you may put it down. But for those ready for challenging reading experience and another version of modern China's "Lust, Caution", do have a try.

You have subscribed to alerts for Isham Cook.

You have been added to Isham Cook's favorite list.

You can also sign-up to receive email notifications whenever Isham Cook releases a new book.