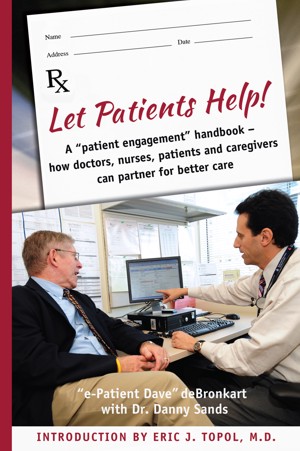 “There’s not a doctor or patient in the land who won’t benefit from reading this clear, concise manual which sets out how each can contribute and collaborate to get better and safer healthcare.” - Dr. Tessa Richards, Analysis Editor, British Medical Journal

Let Patients Help is a concise, action-oriented handbook on how to do what medicine calls “patient engagement” – an activated, empowering partnership between patients and their medical professionals. It’s a book of lists:

I am a better doctor for having read this book. It is clear, concise, and practical. It contains powerful truths that will help both patients and providers (and all the organizations that support them) work together towards what really matters.

Dave's story is a testament to the power of people working together to accomplish amazing things against all odds. That's what we need to do. This is how to start doing it.

Excellent book! A must read for patients of all kinds, health care professionals and for those working in improving the patient experience. Dave writes like he talks and if you haven't heard Dave talk yet check out his website for the link to his TED talk.