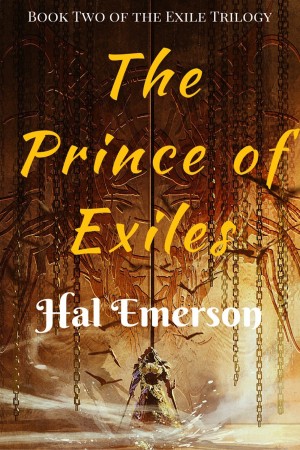 The Prince of Exiles

By Hal Emerson
After the victory at Aemon's Stand over his brother Ramael, the Prince of Ravens is now a confirmed member of the Exiled Kindred. But his new-found life is shattered when the Empire invades to take revenge. Raven soon finds himself faced with a choice: does he run, leaving Leah, Tomaz, and the other Kindred behind, or does he become again a Prince, and fight the very Empire he was born to rule? More
After defeating his brother Ramael at Aemon's Stand and saving the Exiled Kindred from destruction, the former Prince of Ravens, now known simply as Raven, finds himself forced into the life of an Exile. As winter comes, closing off the Kindred from the newly conquered city of Roarke, he follows his friends Leah and Tomaz into the lands of the Kindred, where he begins a new life, safe from the threats of the Empire, and forever relieved of the responsibility of leadership.

But the other Children of the Empress, his brothers and sisters, have not been idle, and soon his new world comes crashing down around him as the Empire takes revenge for the life of Ramael, stripping the Kindred of all defense, leaving them teetering once more on the edge of annihilation. Raven soon finds himself faced with a choice: does he once more run for his life, leaving Leah, Tomaz, and the other Kindred behind, or does he become the prophetic Prince of the Veil, and fight back against the very Empire and Mother he knows to be invincible?
Available ebook formats: epub mobi pdf rtf lrf pdb txt html
First 20% Sample: epub mobi (Kindle) lrf more Online Reader
pdb
Price: $7.99 USD
Buy Add to Library Give as a Gift
How gifting works
Create Widget
Tags: fantasy redemption epic fantasy empire prince medeival exiled kindred prince of ravens hal emerson adaflja prince of exiles the exile series
About Hal Emerson

Hal Emerson lives in the San Francisco Bay Area. He has an undying obsession with raspberries and good espresso.

Reviews of The Prince of Exiles by Hal Emerson