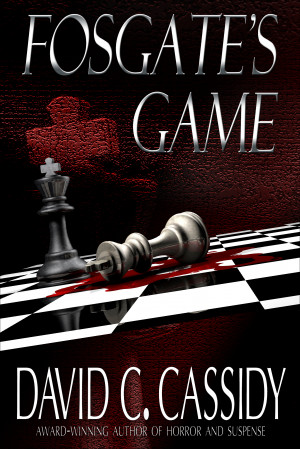 For Chadwick Harlow, a peaceful Englishman, drinks with his business partner—a ruthless hunter—is a weekly affair. But when the conversation takes a menacing and mysterious turn into the supernatural, his wits are put to the test in a deadly challenge. Clinging to life but praying for death, Chadwick must summon the will to survive. More
* 4-time ReadersFavorite.com 5-Star Selection

"Eloquent and eerie ... this is how a story should be written." - Amazon Reviewer

"Move over Twilight Zone ... David C. Cassidy may have you beat." - Amazon Reviewer

"This one will curl your hair." - Amazon Reviewer

Award-winning author David C. Cassidy invites you to light up a candle and curl up in your favorite reading chair on a cold, blustery night. In this chilling tale of supernatural horror where reality meets The Twilight Zone, nothing is ever as it seems—and nothing can prepare you for the evil that lurks in the hearts of men. Eerie and sinister, Fosgate’s Game is a haunting tale of greed, dark magic, and murder.

IT WAS A DARK AND STORMY KNIGHT.

For Chadwick Harlow, a peaceful, easy-going Englishman, after-dinner drinks with his business partner—a ruthless, hard-edged hunter—is a weekly affair. But when casual conversation takes a mysterious and menacing turn into the supernatural, his wits are put to the test in a deadly challenge. Clinging to life but praying for death, Chadwick must summon the will to survive, before all is lost in a terrifying descent into madness.
Download: epub
Price: Free! USD
Add to Library
Create Widget
Tags: thriller horror suspense supernatural ghost story twilight zone hitchcock
About David C. Cassidy

Award-winning author David C. Cassidy is the twisted mind behind several best-selling novels of horror and suspense. An author, photographer, and graphic designer—and a half-decent juggler—he spends his writing life creating dark and touching stories where Bad Things Happen To Good People. Raised by wolves, he grew up with a love of nature, music, science, and history, with thrillers and horror novels feeding the dark side of his seriously disturbed imagination. He talks to his characters, talks often, and most times they listen. But the real fun starts when they tell him to take a hike, and they Open That Door anyway. Idiots.

David lives in Ontario, Canada. From Mozart to Vivaldi, classic jazz to classic rock, he feels naked without his iPod. Suffering from MAD—Multiple Activity Disorder—he divides his time between writing and blogging, photography and Photoshop, reading and rollerblading. An avid amateur astronomer, he loves the night sky, chasing the stars with his telescope. Sometimes he eats.

Review
Sue Erickson reviewed on April 22, 2013
(no rating)
you should have more download options.

These opening lines had me. Everything that followed did not disappoint. Thanks to the talented David C. Cassidy's visual writing style and attention to detail, I felt like I was hunkered down in front of the television, absenting depositing popcorn into my mouth while spellbound by a classic black-and-white Alfred Hitchhock film. Good stuff.

In my review for Velvet Rain, I referred to Cassidy as a master puppeteer, due to his ability to elicit strong emotion from his readers. Fosgate's Game is further testament of his skill to capture his audience and move them through scenes like chess pieces. Cassidy also proves how versatile his writing voice is. Where Velvet Rain's characters are primarily small town folk in Iowa with limited education, Fosgate and Chadwich represent England's upper-crust. Cassidy pulls off this portrayal swimmingly. Fosgate is a very dignified killer.

I highly recommend this superb novella to anyone who enjoys suspense, Alfred Hitchcock films, The Twilight Zone, and exceptional writing.

You have subscribed to alerts for David C. Cassidy.

You have been added to David C. Cassidy's favorite list.

You can also sign-up to receive email notifications whenever David C. Cassidy releases a new book.