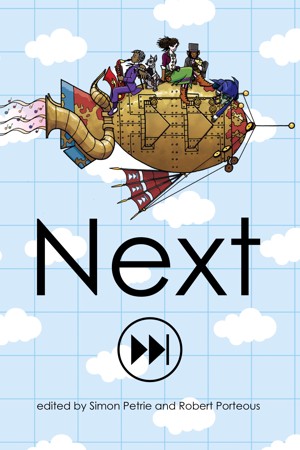 By Simon Petrie
Rated 3.00/5 based on 1 reviews
The theme for CSFG’s next anthology is… well, ‘Next‘.

Sequence. Succession. Cause and effect.

An anthology of Australian speculative fiction edited by Simon Petrie and Robert Porteous and published by the Canberra Speculative Fiction Guild. More
Next suggests ‘change’, perhaps, but it doesn’t have to invoke change, it can simply be an account of cause-and-effect. Soemtimes it’s the absence of change, the sense of inevitability, that gives the story its terrible power and its resonance. Or it might be a rite-of-passage; of invention and exploration; of the testing and transgression of boundaries; or a story laden with doom or hope or just the inevitability of inescapable repetition. Yup, this theme is a theme for all seasons; it’s a cut and come again theme that can mean pretty much whatever people want it to mean.

The selected stories range far and wide across all aspects of the speculative genres, from gentle fantasy to full-blooded dystopian SF to hackle-bristling psychological horror, while also canvassing in its sweep whimsy, adventure, romance, parody, and tragedy.

There are names among the authors that will be familiar to many, as well as some nuggets of newly-emerging talent. It will be an absolutely ripping read.

Next will be launched at the Australian national science fiction convention, Conflux 9, in April 2013.

Table of Contents (in alphabetical order):

Daniel Baker: ‘Stories in the Square’

Richard Harland: ‘Here’s Glory For You’

Edwina Harvey: ‘Next, cried the Faun’

Martin Livings: ‘Cause and Effect’

Chris McGrane: ‘The Cat and his Zombies’

Robert Phillips: ‘A Dream of Something More’

Nicky Rowlands: ‘On the Wall’

Steve Simpson: ‘The Electrician and the Circus’

Janeen Webb: ‘Hell is Where the Heart Is’

Simon Petrie grew up (or so he claims) on the plains of North Canterbury in New Zealand, and now lives in Canberra’s wild west. He has previously edited four issues of 'Andromeda Spaceways Inflight Magazine' (issues 35, 40, 51, and 54) and co-edited 'Light Touch Paper, Stand Clear' (Peggy Bright Books, 2012) with Edwina Harvey. He has so far succeeded in including at least one contribution from a CSFG member in every volume he’s edited, and is very relieved that 'Next' is no exception.

While most of the stories in this volume could be improved by the addition of a dancing dinosaur and some upbeat songs, few, if any, seem to have been written by authors who hate the English language and want it to suffer.

You should buy it.

The overall impact of the book was to reinforce my conviction that science fiction is essentially a dead genre. Most of the thirty stories in this book were fantasy, and fully half the science fiction stories reworked the tired old "meddling with things man was not meant to know screws the world up" trope.

There were a few good sci-fi-ish ones:

"Those Days", a chilling story about original sin, was reminiscent of early Philip K Dick.

"Someone's Daughter" made me want to know the narrator better and had an excellent premise that would have made a good novel. It ended too early to avoid explaining too much and was occasionally rather difficult to follow, but who am I to complain about those sorts of things?

The fantasy stories drew very heavily on traditional fairy tales, and there was a long string of rather oversexed ones in a row that had me worried for a while.

My favourites were, in order of appearance:

"Imported Goods - Aisle Nine", which has the best opening line of any of them. I read this before publication because its author is me old pal Dave.

"Almost Beautiful", renaissance fantasy grounded in the real world about the difficulties of being neither fish nor fowl nor good red herring.

"The Room", a haunting tale in every sense of the word.

"When Money Talks", a nice tale about technology stealing jobs from fleshers.

"Phoenix Down", a slice in the life of the 'anchor' of a mystical superbeing, could have gone on for longer.

"Girl Finds Key" had a neat premise, but the characterisation seemed to go off the rails at the end.

I look forward to more anthologies produced under the auspices of a benevolent Sky-Whale. Great is Diana of the Cetaceans!

You have subscribed to alerts for Simon Petrie.

You have been added to Simon Petrie's favorite list.

You can also sign-up to receive email notifications whenever Simon Petrie releases a new book.