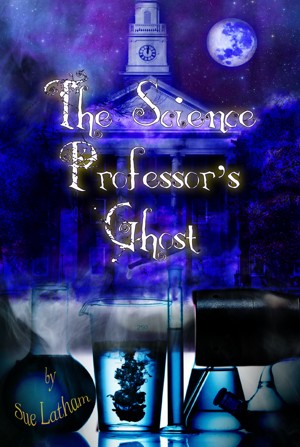 By Sue Latham
Margo Monroe is a professional ghost hunter. When she starts getting messages from Professor Nigel Pritchett, she's understandably concerned - the professor was the first murder victim in decades in the small town where she works. Professor Pritchett knows who murdered him and why. Margo's job is to find out what happened without ending up as a ghost herself. More
Nigel Pritchett was the first murder victim in Throckmorton since 1934. When Margo Monroe gets a message from him on the day of his funeral, she is concerned but not terribly surprised--she's a professional ghost hunter, and her boss was the late professor's oldest friend. While Margo and her team set out to find out what happened to Professor Pritchett, they also find time to help a precocious fifth grader named Chester, who claims his school is haunted.

Margo soon finds herself embroiled in more than she bargained for. Her job is to find out what happened to the late professor, before she ends up as a ghost herself.
Available ebook formats: epub mobi pdf rtf lrf pdb txt html
First 20% Sample: epub mobi (Kindle) lrf more Online Reader
pdb
Price: $3.99 USD
Buy Add to Library Give as a Gift
How gifting works
Create Widget
Tags: ghosts ghost hunting paranormal fiction ghost fiction
About Sue Latham

Sue Latham is a native of Dallas, TX. She graduated from the University of Texas at Arlington rather longer ago than she cares to think about.

She began her writing career many years ago writing online help and technical manuals for the corporate world. In 1998, she landed a job with a small UN agency and moved to Switzerland. The one-year assignment turned into a decade, during which time she traveled extensively. She feels fortunate to have been to every continent except Antarctica. In Europe, she walked in the footsteps of Beethoven, Mozart, Einstein and van Gogh and was once blessed by the pope. Her travels have taken her to the Nazca desert where she endured a harrowing flight over the lines in a small plane; to Africa on a quest for a glimpse of the rare white rhino; and to the Australian Outback, where she was stranded by a flash flood and had to spend the night in a Subaru.

In 2009 she returned to Dallas and started writing fiction. Her novels, The Haunted House Symphony and The Science Professor’s Ghost, are ghost-hunting mysteries featuring a team of ghost hunters led by Sue’s intrepid alter-ego, Margo Monroe. Both books are available on Amazon, Barnes and Noble and other online bookstores as ebooks and in paperback.

Reviews of The Science Professor's Ghost by Sue Latham

You have subscribed to Smashwords Alerts new release notifications for Sue Latham.

You have been added to Sue Latham's favorite list.

You can also sign-up to receive email notifications whenever Sue Latham releases a new book.