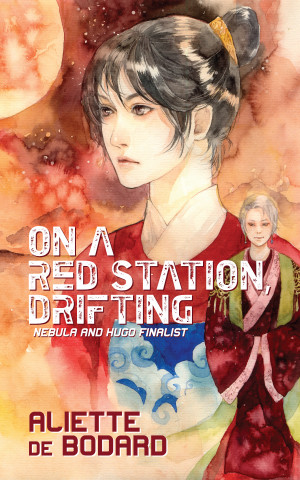 On a Red Station, Drifting

For generations Prosper Station has thrived under the guidance of its Honoured Ancestress: born of a human womb, the station’s artificial intelligence has offered guidance and protection to its human relatives.

But war has come to the Dai Viet Empire. Prosper’s brightest minds have been called away to defend the Emperor; and a flood of disorientated refugees strain the station’s resources. As deprivations cause the station’s ordinary life to unravel, uncovering old grudges and tearing apart the decimated family, Station Mistress Quyen and the Honoured Ancestress struggle to keep their relatives united and safe. What Quyen does not know is that the Honoured Ancestress herself is faltering, her mind eaten away by a disease that seems to have no cure; and that the future of the station itself might hang in the balance…

Engineer by day, writer by night. Winner of two Nebula Awards, a Locus Award and a British Science Fiction Association Award. Writer of Science Fiction, Fantasy and other less clearly defined stuff. Author of The House of Shattered Wings (out now from Gollancz, Roc), a dark fantasy set in a Paris devastated by a magical apocalypse, where Fallen angels mingle with alchemists, witches and Vietnamese ex-Immortals. Also author of the Xuya universe series, an alternate history future with a dominant Vietnamese galactic empire and biological artificial intelligences housed in spaceships.

This is a very good, very complicated story of culture, family, status, and duty. I really liked it.

The setting is an interstellar empire modeled on, or descended from, ancient Vietnamese culture. Some of the nobles in the outlying regions are in rebellion, seizing planetary systems and executing anyone who opposes them. The young, inexperienced emperor is pulling his forces back, abandoning the outer worlds. Meanwhile, all citizens of rank are equipped with implants containing the personalities of ancestors who advise them. Other personalities include the artificial intelligence that runs the station but is suffering a crisis and may collapse, and a visiting specialist who hopes to assist in "healing" the AI.

A young female administrator flees her world just before it falls. She seeks shelter in a large space station, a permanent habitat, run by a distant cousin. Their ranks and conflicting positions in a time of war are a source of stress in a very rigidly defined society, a local crisis on the station, and the greater threat that faces the empire.

You have subscribed to alerts for Aliette de Bodard.

You have been added to Aliette de Bodard's favorite list.

You can also sign-up to receive email notifications whenever Aliette de Bodard releases a new book.