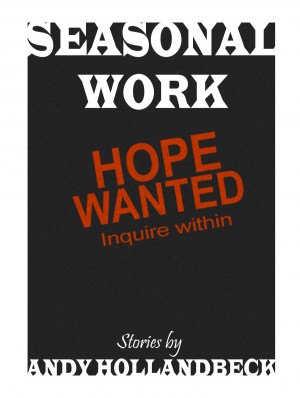 Many of these bundles of words first appeared on his blog, Logophilius, and were run through the editorial wringer once again before added to this e-book.

Seasonal Work also contains half a dozen or so other stories that are appearing in print for the first time.

Humorous, witty, even charming. Andy has both a penchant and love for words expressed in amusing anecdotes, pithy verse, and well-crafted stories.

(reviewed the day of purchase)
Candace Schaefer reviewed on June 21, 2013

Mr. Hollandbeck wrote an imaginative and diverse collection of short stories and poems. I loved the final story in the book, "Buddies", and how it ended with an uplifting message of love and joy.

In addition to "Buddies" there were several standout stories in Hollandbeck's book.

This story really captured my attention. I had to think about the ending and whether or not I would do the same thing. After some self reflection I concluded that I don't think I could be so cold-hearted to an evil person but I also don't believe that Police Officers are the only and most effective way to carry out justice. The world can be so ugly and it was nice to see the weak person win in the end.

Both my parents passed away from Cancer, one quick and the other slowly. I can appreciate why Martin made his choice in the end but it did seem the cowards way out. Choosing to not deal with a terrible problem is much easier than having the courage to see things through to the end. However, I know that watching your parents die is one of the most horrible things that humans have to go through and we each handle it differently. I also liked seeing the many dimensions of Martin. First, how he felt an obligation to take care of his mother even though he didn't seem to particularly like her or her unpleasant behavior and secondly how he chose to deal with her in the end. This short little story was very thought provoking and stayed with me several days after my initial reading.

The Son She Loves Less

This story reminded me of the book "A Child Called It". Not because the mother was abusive in "The Son She Loves Less" but because it is always a mothers choice on how you treat your children. I understand the theory behind loving one child more or less than the other but since I don't have children I cannot fully understand it in that context. However, I've had many cats in my life and there was a special one, Mickey, that I know I loved above all others. You cannot change your feeling but you can choose to treat them equally. In "The Son She Loves Less" I don't think the mother could get over the loss of her favorite child and fully love the one she had left. Very sad.

I'm a sucker for romantic stories and this one hit the sweet spot. I was rooting for Joshua from the beginning and I hoped that Maria wouldn't break his heart. As I was reading I kept holding my breath waiting for a horrible twist to happen in the end but to my surprise and delight it was a straightforward sweet story.

(reviewed 21 days after purchase)
Bev Hollandbeck reviewed on June 15, 2013
(no rating)
This delightful book is a collection of short stories and poetry, much of it from either a blog or a writing group. Some of it makes you smile; some of it makes you think. I enjoyed it very much.

You have subscribed to alerts for Andy Hollandbeck.

You have been added to Andy Hollandbeck's favorite list.

You can also sign-up to receive email notifications whenever Andy Hollandbeck releases a new book.