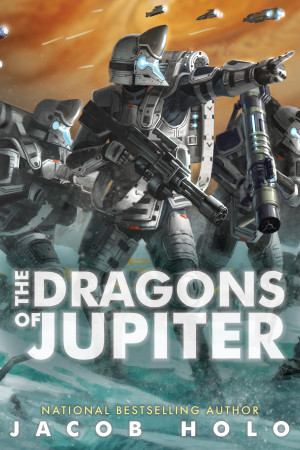 The Dragons of Jupiter

By Jacob Holo
Rated 5.00/5 based on 2 reviews
Two worlds at war. Two brothers at war.

Kaneda and Ryu Kusanagi must face each other in a battle that will shake the great powers of the solar system and force both men to question what they believe in. More
Two worlds at war. Two brothers at war.

With advanced weaponry and impenetrable armor, the Crusaders smash aside anything that stands in their way. Led by Kaneda Kusanagi, they have only one mission: to destroy Matriarch, the last thinking machine, and free the people of Jupiter from her tyranny.

Standing in their way are the Dragons, led by Kaneda’s estranged brother Ryu. With super-human reflexes and invisible battle suits, the Dragons are masters of infiltration and sabotage. Loyal only to Matriarch, they will stop at nothing to protect their way of life.

Jacob Holo has been a recreational geek since childhood, when he discovered Star Wars and Star Trek, and a professional geek since college, when he graduated from Youngstown State University with a degree in Electrical and Controls Engineering. He started writing when his parents bought that “new” IBM 286 desktop, and over the years, those powers combined to push him to the next level of nerddom: a sci-fi author who designs intricate worlds and tech systems...and promptly blows them up in a string of nonstop action.

He is the author of seven books, including national bestseller The Gordian Protocol (with David Weber), military sci-fi The Dragons of Jupiter, YA urban fantasy Time Reavers (a Kirkus Reviews Best Indie Book of 2014), and the mecha space opera trilogy Seraphim Revival (Bane of the Dead, Throne of the Dead, Disciple of the Dead); and YA steampunk fantasy The Wizard’s Way (with H.P. Holo).

Between novels, Jacob enjoys gaming of all sorts, whether video gaming, card gaming, miniature wargaming, or watching speed runs on YouTube. He is a former-Ohioan, former-Michigander who now lives in South Carolina with his wife/boss H.P. and his cat/boss Nova.

Reviews of The Dragons of Jupiter by Jacob Holo

Great plot, great characters, great world, and one heck of an awesome ending. That's pretty much how I would describe The Dragons of Jupiter if someone asked me about the novel. The story centers around two brothers Ryu and Kaneda, their personal war, as well as the ongoing interplanetary conflict that is raging around them. The author does an excellent job of introducing the characters as well as the universe they exist in. The characters are done extremely well and it is interesting as a reader to become aware that you are favoring one side of the conflict versus the other. Some of the characters follow stereotypical sci-fi archetypes but that is one of the charming things about this book. The plot ranges from huge battles to small scale one-on-one fights and it handles each equally well. I won't include any spoilers but will note that I thoroughly enjoyed the ending.

The Dragons of Jupiter starts very quickly establishing the relationship between the brothers. Although action-packed, Jacob Holo's characters come alive and we feel their turmoil. I highly recommend this book to those who enjoy an intelligent and well-constructed story.

You have subscribed to Smashwords Alerts new release notifications for Jacob Holo.

You have been added to Jacob Holo's favorite list.

You can also sign-up to receive email notifications whenever Jacob Holo releases a new book.