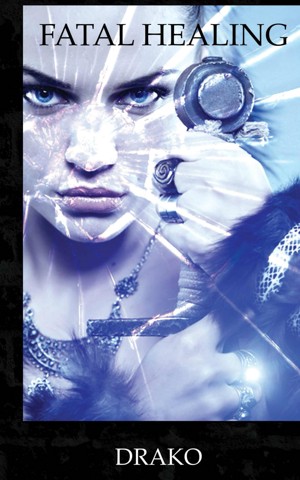 Apollo has waited ages for Odele's return to Olympus to heal the heart he'd broken ages before. The process of healing won't be easy, and Odele's heart is not the only heart to be healed. Both Apollo and Odele's lives are at risk, as they join the god of darkness in a battles against two children of Gaea and Odele's own brothers, Cronus and Typhon. Will Odele's heart be healed, and most importantly, will anyone survive this unique healing process?
Available ebook formats: epub mobi pdf rtf lrf pdb txt html
First 20% Sample: epub mobi (Kindle) lrf more Online Reader
pdb
Price: $0.99 USD
Buy Add to Library Give as a Gift
How gifting works
Create Widget
Tags: god goddess olympian olympians olympian gods the dragon hunters
About Drako

Reviews of Fatal Healing (The Dragon Hunters #3) by Drako

Fatal Healing (Book 3 of the Dragon Hunters series) was a very short read but I understood that all of the dots had to be connected to continue the story. This piece gives us a check in on the couple Apollo and Odelle. We first meet Odelle in Book 1 as the mortal Cassandra but we soon find out that she has a bigger purpose in the series. Fast forward to this book and she is goddess Odelle and her love interest is Apollo but they are having a lover’s quarrel that spans thousands of years.

Even though, this book was not very long, I did enjoy it. It gave me that action that I have grown to love and I got to peek in on two of my favorite characters of the series, Brandon and Ares. The two are having issues of their own as Brandon is trying his hardest to heal from developments that happened in the previous book not to mention that now he is aware who his mate is. Ares, on the other hand, is finding Victoria to be a handful in her condition.

I wouldn’t consider this book to be a filler because a few pieces of the plot were pivotal to move the series along. I can say that the Odelle and Apollo storyline was very secondary to the overall movement of the plot. I don’t know if it was the fact that they weren’t as evident in the previous book or that the action and vital pieces of information just overpowered their plot but I wasn’t too moved by their storyline. Now for Book 4…

I was given this book (ahead of book 5) in exchange for an honest review by the author via Lovers of Paranormal.

Another gripping continuation in the Dragon Hunters series. I couldn't quite give this book the 5 stars that I gave the previous two books. I spent a little time throughout this book wondering where these additional Dragons had come from and why they hadn't been mentioned before. I hate that 'hang on, what?!' feeling when I am reading a book and that happened a couple of times to me during this one.

Once again the plot moved along brilliantly and there were plenty of action scenes. The characters continue to be well-written and consistent. I love the sarcastic humour which seems to suit these characters so well. Even less of Andreas and Kazarian in this book, sadly. And when will we get Vic back I wonder?! Brandon continues to go from strength to strength and I was glad to see more of him and Demun together in this book but I would still like more. Victoria is still strangely not so likable to me. I think it must be her over-aggressive nature which is far worse than any of the males in the book. Jarel, again, so great to read about!

(reviewed 4 days after purchase)
Melissa A. Giles reviewed on July 8, 2013

The Bigger They Come, The Harder They Fall?


… Or, the easier it is for them to squash you into a sticky paste? These are just a few of the many things to consider when you are at war with the titans.

The battles for control of existence continue in the third installment of The Dragon Hunters Series. The forces against our heroes are growing in both numbers and boldness as both sides plot and plan for victory. Lucifer has made his way into the mortal realm, the Titans have risen, and Cronus is on the offensive. Now is not exactly the greatest time to be one of the good guys.

But all who have fallen for this series as this reader has know that if there is one thing to never forget about dragons is the trait of loyalty. Whether it be to a mate, family, or their destined duties. Therefore, if Cronus wants a war, he is sure to get one on the level he has never known.

Though shorter than the previous books, this one still packs a punch. With more action than you think could be fit in while still finding time for moments of humor, the growing chance for new loves, and the true fulfillment of a love interrupted.

My only complaint, if one could call it that, is that I wanted more time with the characters. It felt like it was just a span of minutes from the first sentence to the final word. But, there is just as much a compliment in this statement. This book just sucks you in and all else is lost until you finish.


I received this book from the author in exchange for an honest review.