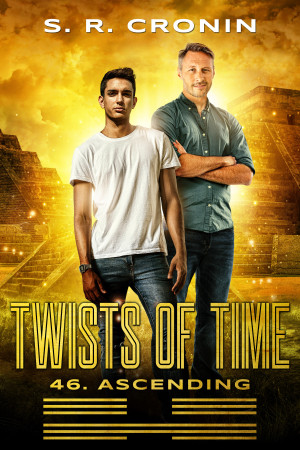 Alex is a former basketball player who has always been able to bend time. These days he teaches physics and parents three quirky children alongside his unusual wife.

When the administration at his high school wants to reignite its history with organized hate groups and return to an era of white supremacy, Alex can no longer remain the quiet bystander. He must stand up and fight for what he believes is right.

Further complications arise when Stan, an old high school rival, needs Alex's code-cracking skills. Just when Alex has his hands full at school, he's drawn into a treasure hunt. Stan and a handful of ex-grad students lost an obsidian box years ago containing instructions to find an important discovery. As they reconstruct what happened the night the artifact went missing, they need Alex's help to find the last two hidden relics containing the remaining clues to the treasure.

As both of Alex's situations grow more dire, it becomes clear he must tap into the abilities he left behind. Can he manipulate time for the people and causes he cares about most?
Available ebook formats: epub mobi pdf lrf pdb txt html
Price: $3.99 USD
Buy Add to Library Give as a Gift
How gifting works
Create Widget
Tags: puzzle treasure immigration time dilation dreamers time altering code breaking time control mayan relics daca
About S. R. Cronin

Hi. I’m Sherrie Cronin, the author of a collection of six speculative fiction novels known as 46. Ascending. I’m now in the process of publishing a historical fantasy series called The War Stories of the Seven Troublesome Sisters. A quick look at the synopses of my books makes it obvious I’m fascinated by people achieving the astonishing by developing abilities they barely knew they had.

I’ve made a lot of stops along the way to writing these novels. I’ve lived in seven cities, visited forty-six countries, and worked as a waitress, technical writer, and geophysicist. Now I answer a hot-line. Along the way, I’ve lost several cats but acquired a husband who still loves me and three kids who’ve grown up just fine, both despite how odd I am.

All my life I’ve wanted to either tell these kinds of stories or be Chief Science Officer on the Starship Enterprise. These days I live and write in the mountains of Western North Carolina, where I admit I occasionally check my phone for a message from Captain Picard, just in case.

Learn about the new series at https://troublesome7sisters.xyz/.

Reviews of Twists of Time by S. R. Cronin

Disclaimer: I received a free (print) version of this book in exchange for an honest review. I needed to 'buy' a copy here before I could leave a review, hence my review is made the same day of purchase!

z2 is the third book in the 46.Ascending series and revolves around Alex Zeitman who has the ability to warp time and hence experience time slower or faster than the rest of us.

Several story lines weave and wend through z2, and characters interlace beautifully and this is where much of the elegance in the novel lies; the back cover blurb is perhaps a little too one-dimensional and really does not do the novel the full justice it deserves.

Reading about chasing after Mayan artefacts, high school physics lessons and sports coaching was a gripping ride which left me wondering how on Earth it was all going to come together in the end! When the end did come I had mixed feelings at first. It seemed to come early, it was rushed and even predictable. However as I continued reading I realised that the real conclusion is more subtle and goes beyond the obvious 'pseudo' conclusion I had read moments earlier.

Characters are fascinating and well developed and the writing style is excellent! For example, a conversation that Alex has with his wife has the potential to be a complete drag to read. But Sherrie provides the background thoughts and concerns that both Alex and Lola have, and this multiple character insight gives a seemingly mundane conversation a whole new level!

There are also original angles on otherwise 'standard' ideas and concepts; telepathy, for example, apparently doesn't have the accuracy that only words can provide! (I'd have assumed it would be more accurate!)

The main character is Alex Zeitman, and ultimately all story lines involve him to some extent. Indeed, the final conclusion is arguably about him more than about anything else. Like other members of his family, Alex has a special ability - to experience the passage of time at different speeds. We also meet Lola who has telepathic abilities and Zane (Alex's son) who is able to morph his body into other shapes.

Daughters Teddie and Ariel also have powers, though we don't see those at work in z2 and would need to read c3 and d4 respectively to see how Teddie has out of body experiences and Ariel is able to see into the future. (Incidentally, x0 centers around Lola and y1 around Zane.)

Although z2 is the third in the series, it is stand-alone. Perhaps there are cross-overs between segments of the plot in z2 and the other novels, but of course at this stage I'd be unaware of those. There was one moment where Ariel seemingly gives Alex some advice about the future and I thought that I may have missed something in an earlier novel, but a few pages later it's explained (although we should note that d4 focuses on Ariel and her ability to see the future - which comes after z2! ;) )

In summary, z2 by Sherrie Cronin is a delightful science fiction novel with a delicate undertone of time manipulation running right through it. A multitude of story lines and characters blend together beautifully to create a 5 star novel with inter-related characters with depth and a poetic conclusion to top it all off!

(reviewed the day of purchase)
Bob Craton reviewed on July 24, 2014

I'm a big fan of this author's first two books, 'x0' and 'y1', so it is no surprise that I love this third volume of the series. Once again she has put together a marvelous tale. I don't know of anyone doing better in the genre of magical realism than she does. All of the books involve the fictional Zeitman family with a different member featured in each volume -- Lola (wife/mother) in the first, Zane (son) in the second, and now Alex (husband/father). Each character is a very real and believable person who just happens to have a special ability.

The author is unafraid of tackling serious social problems, in this case racism, and she does so without being preachy. She also does a lot of research so the facts in the 'realism' part of magical realism are always accurate. (That makes those of us who just make stuff up as we go along feel lazy.) I don't give spoilers so all I will say about the story is that there are two subplots, each with its own set of characters, and that the story-lines merge and the characters meet each other.

As before, the ending is very upbeat and optimistic. As a skeptic, I would not expect such happy endings in the real world. In the Zeitman family's world, however, the conclusion shows the way things could be -- and should be. I find this approach very encouraging.

Note: Each book is a stand-alone story, but 'z2' makes enough references to events in 'x0' and 'y1' that it would help if they are read in order. Believe me, all three volumes are definitely worth reading.

You have subscribed to alerts for S. R. Cronin.

You have been added to S. R. Cronin's favorite list.

You can also sign-up to receive email notifications whenever S. R. Cronin releases a new book.