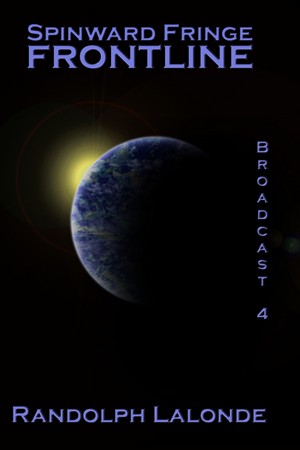 By Randolph Lalonde
Rated 4.65/5 based on 17 reviews
Captain Valance and his crew are finally learning to work as a unit. Oblivious to the grander designs of the Order of Eden, they are drawn into a brutal conflict over a planet the Order is depopulating so they can use it for themselves. Who will survive the Frontline?
Available ebook formats: epub mobi
Price: $2.99 USD
Buy Add to Library Give as a Gift
How gifting works
Create Widget
Tags: adventure space opera war future fiction
About Randolph Lalonde

Spinward Fringe - What They're Saying
Readers from across the globe have reviewed the Spinward Fringe series in text, video and on Internet radio shows. This is a taste of their opinions regarding the Science Fiction Space Opera series by Randolph Lalonde.

Review
Edward Collins reviewed on June 13, 2020
(no rating)
Good story! Some slight spelling problems and I had some problem with the sentence structure in part but , then again, I am from Downunder.

Another good read. Kind of long, but that's just more bang for your buck.

A fantastic tome of the Spinward Fringe series, with a lot of action, and unforeseen developments in the war ravaging the galaxy. Characters we loved and that we believed to be gone are back. Some spelling mistakes, but nothing major. The story is fantastic.

(reviewed 4 months after purchase)
Michael Finney, Sr reviewed on Aug. 21, 2012
(no rating)
Excellent! Well written and innovative. The kind of science fiction I like to read

Another good entry in what is becoming a truly great series. Wanna-be literary critics might take issue with the editing, but in my opinion the excellent storyline, characterizations and overall pace of the novels trumps all.

I've read the series through twice, and can't wait to read Broadcast 7.

In comparison to the other books in the series, this is value for money and you can really get into it as it is a good length. The same author errors are present (spelling, grammar, naming) and this is getting to be a bit irritating and makes one wonder why no proofing is done to provide a "polished" end product.

7 books Spinward Fringe Broadcast were one of the most exiting 7 books I read in years. They contain non-stop adventure, sophisticated plot, a lot of unexpected development and sudden turns. I could not stop reading until I’ve reached the end. Highly recommended for the SIFI lovers.

The Spinward Fringe world continues to enchant. I was telling someone earlier today to check out this series, and mistakenly said that the author was "Jake LaLonde." I guess that is a good indicator of how well the books draw me in... While my favories are Origins and Triton so far, Frontline was all that I have come to expect from this series.

(reviewed 15 days after purchase)
jstoc reviewed on June 19, 2011
(no rating)
Lalonde is fantastic. I keep reading one after the other.

The First Light Chronicles and Spinward Fringe series by Randolph Lalonde evokes the earlier golden age of sci-fi storytelling. This wide ranging series is a delight in the vein of an early Asimov or Clarke. Many writers bog down their storytelling with attempts at distracting explanations of hard science to the detriment of the actual story. Gene Roddenberry was asked to describe the first Star Trek series and he said it was, “Wagon Train to the stars”. (For you youngsters, Wagon Train was an early sixties TV show about a wagon train's crossing to the West.) As in those early stories you didn't need to explain how a wheel works or how a horse pulls a wagon. In the same way LaLonde doesn't get bogged down trying to explain every detail of how a ship works and doesn't try to invent an entire new vernacular for the sci-fi elements we have come to take for granted. A wormhole is a wormhole. We don't care how it works, we want the action that lies at the end of the journey. LaLonde keeps his stories flowing in a linear fashion exploring the characters and their environments. The universe he populates can easily be seen as a far future extrapolation of today's society where major corporations compete with governments and the governments fall by the wayside. His characters are fully fleshed out but have their foibles. There is plenty of action in a true space opera fashion. There are complicated relationships that are easily identified with, no matter that they take place in hyperspace.
Each book in the series stands alone as an enjoyable work. But for maximum enjoyment, the reader should read them in order as each carefully builds on the previous work and the surprises and adventures are more rewarding when read in order.
A quick word about editing. I've seen some reviews that disparage the editing and typos. To these folks I can only say get a life. It's true there is an occasional editing error, but they are few and far between and do not detract from the works. I have paid far more money for a hardback book of lesser quality. For the price of free or a couple of bucks, this series is a bargain and a delight.