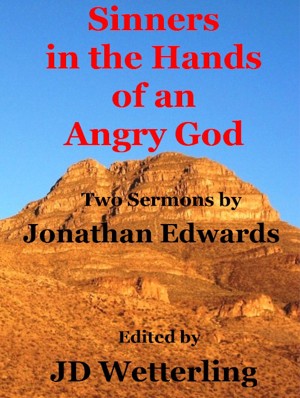 Sinners in the Hands of an Angry God

By JD Wetterling
Who would have the audacity to edit “the greatest sermon ever delivered on the North American continent?” Someone whose feeble mind needs shorter sentences to follow the brilliant thought of the great theologian Jonathan Edwards. Not a paraphrase! A second sermon reveals another side of God and Edwards: The Christian Pilgrim, as heartwarming as Sinners... is terrifying.
Download: epub mobi (Kindle) pdf more Online Reader
rtf lrf pdb txt
Price: Free! USD
Add to Library
Create Widget
Tags: great awakening best sermons
About JD Wetterling

JD Wetterling is the author of Son of Thunder, a novel based on his experience as a fighter pilot in Vietnam, "No one...," a gospel presentation for everyman, No Time To Waste, a true story of amazing grace, and Grace in the Growing Season, a memoir. He's had over 250 op-ed columns and essays published in The Wall Street Journal, the Los Angeles Times, the St. Petersburg Times, the Atlanta Journal Constitution, and numerous other periodicals.

He flew 268 combat missions in an F-100 in the Vietnam War, earning two Distinguished Flying Crosses, fourteen Air Medals, and the Vietnamese Cross of Gallantry. He was top gun in every fighter squadron in which he served in the U.S. Air Force.

JD has addressed audiences in all walks of life in all parts of America. His motivational messages cover current affairs, business, history, patriotic themes and eternal truths.

You have subscribed to alerts for JD Wetterling.

You have been added to JD Wetterling's favorite list.

You can also sign-up to receive email notifications whenever JD Wetterling releases a new book.