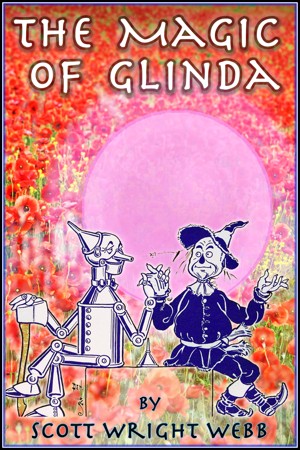 The Magic Of Glinda

By Scott Webb
The Wizard of Oz is our story and we deserve to know what it’s about. We deserve to see our own situations magically turn for the better when all seems lost, to get in touch with our intuition, to hear our calling, and to avoid stupidity while still loving those around us. The movie is about the underlying mechanics to all that.

Transformation as "myth" is an ancient topic now worth revisiting. More
Every aspect of "The Wizard of Oz" was micro-managed to perfection. This could have resulted in a disjointed final product, but instead, somehow, the movie turned out seamless.

What’s the movie about? It’s about a girl from Kansas transported to an amazing land of fantasy on a quest to find her way back home.

Hold up! Rewind. The opening scenes are all about Dorothy’s neighbor, Miss Gulch, who shows-up riding a bicycle, bearing a sheriff’s order giving her the right to take away Dorothy’s dog, Toto, to be destroyed. Then Dorothy is transported, not to a world of fantasy, but into the symbolic interpretation of her own life back in Kansas, where each major character in the Land of Oz sprang from Dorothy’s unconscious mind. This is where we find “Miss Gulch” taken to her extreme as a most evil witch.

Now this is all very interesting, and simple, but we want to notice the interplay of these characters as working through a puzzle in Dorothy’s mind. The story is not about Dorothy trying to find her way home because Dorothy has never left home. She was knocked unconscious in her very own bedroom at the beginning, and at the end, we find her having not ventured a single inch from her bed. Her journey is about the transformation of placement, not merely one’s return to it.

Scott W. Webb graduated from Wheaton College, Chicago, 1981 with a degree in philosophy. He is the father of two grown children, Art and Maddie, and grandfather to two, Kaden and Hannah. He worked for the Anchorage Daily News in Alaska for seven years before moving to Nashville, Tennessee in 1990 after his wife signed a developing artist deal with Star Song Communications and then with Curb Music. In 2000, he became interested in "health and wellness" and opened a private colon hydrotherapy office in 2001, where he is in his 14th year. In 2006, he wrote the book, "Inside Poop," about his experiences and learnings as a colon hygienist, which has a five star rating on Amazon. He has authored other books on a wide variety of topics and been published in ACRES USA and Massage magazine.

More recently, he filmed the 2013 Cross Country season for the Brentwood High team, which finished in third place at the NXN Nike Cross Nationals, December 7, 2013. Through that, he learned that many student runners struggle with low iron as indicated by the "low ferritin" medical test. After making dietary suggestions for the Brentwood team resulting in positive feedback, he put together a recent book covering his understanding of iron assimilation in the human body titled "Low Ferritin." It includes dietary and practical suggestions.

His other interests include gardening, raising chickens, and a wide range of home fermentation projects.

Reviews of The Magic Of Glinda by Scott Webb

You have subscribed to alerts for Scott Webb.

You have been added to Scott Webb's favorite list.

You can also sign-up to receive email notifications whenever Scott Webb releases a new book.