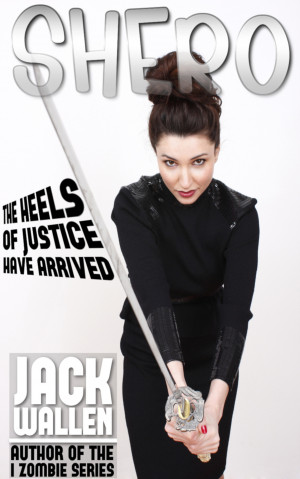 Rated 3.67/5 based on 3 reviews
Unlike the every day super hero, Shero battles more than evil villains. Shero battles broken heels, runs in his stockings, broken nails, and the scorn of the public at large. In this first installment Shero finds the perfect black dress, a possible lover, a deadly shade of fingernail polish, some nasty, nasty foes, an internal super hero political war, and a narrator full of attitude. More
Part Sex in the City, part X Men, part Priscilla, Queen of the Desert -- Shero is a super hero novel with a twist. Shero is the pride of SSH (Society of Super Heroes); but not only is he one of their best fighters, he's also the best dressed (in dresses and heels of course.) But when V.I.L.E. (Villains In League with Evil) plants the seeds of doubt and hate for Shero in the minds of the citizens, Shero is placed on inactive duty. But when SSH finds its back against a wall, Shero saves their hide from the shadows...a true hero.

Shero is the most unlikely of heroes on the surface. But once you get to know the man behind the mascara you understand that heros come in all shapes, sizes, colors, and genders. The Shero series offers up a humorous look into the world of super heroes, cross dressers, as well as human nature. With a narrator who is just as happy mouthing off as he/she is describing to the reader the action of the book, you will find yourself laughing at the situation, the attitude, and maybe even yourself.

Caution: You may find yourself yelling "You go girl!" which could certainly lead to public humiliation. You've been warned.

Jack Wallen is what happens when a Gen Xer mind-melds with present day snark. Jack is a seeker of truth and a writer of words with a quantum mechanical pencil and a disjointed beat of sound and soul. Although he resides in the unlikely city of Louisville, Kentucky, Jack likes to think of himself more as an interplanetary traveler, on the lookout for the Satellite of Love and a perpetual movie sign...or so he tells the reflection in the mirror (some times in 3rd person). Jack is the author of numerous tales of dark, twisty fiction including the I Zombie series, the Klockwerk Movement, the Fringe Killer series, Shero, The Nameless Saga, and much more.

Reviews of Shero by Jack Wallen

I was asked a while back to give my thoughts on Shero, a superhero-themed story with a twist by Jack Wallen. I found it to be a great example of envelope pushing fiction, and I think the world needs way more Shero.

Now, I have to prove that statement.

Shero is a transgendered superhero. He rocks fighting crime and the forces of V.I.L.E. in heels and a dress, with his katana and fingernail shooting superpower. He's open about who he is, even if the public doesn't understand, they love him anyways. Shero is a multifaceted character, and he has a log of inner doubts, questions and frustrations. He doesn't lead the perfect, idealized superhero life, which makes him a very sympathetic character. You want to cheer for him. He's lovable, entertaining and misunderstood.

But, just like how gender is actually a shade of grey rather than an oppressive black and white, so are good and evil. Jack Wallen takes the concepts of hero and villain and mixes them around, until you're not sure who is good, and who is evil. The plot is a war between perceptions of stark-contrast good and evil, and reality. It's a refreshing take on the subject, because most bad guys are defined as "bad" just because, and good is good because it isn't bad.

The suspense and action kept me on the edge of my seat. Shero kicks ass, takes names and does all the things a superhero does, all while looking better in a fancy dress than I do. Various superpowers were unique, different and felt super while still giving action scenes that weren't horribly overpowered.

"Shero" by Jack Wallen is a fun romp in Size 14 patent-leather Mary Janes! It is full of sass and attitude, with a narrator who feels like a girlfriend gossiping over coffee and sweet stuff. The ultimate theme of this novel is one that everyone should learn -- it's a story about one man's (girl's!) struggle to remain true to himself in the face of a world that won't let him do so easily. I recommend this book for a read that is funny, full of life, and for a date with a character you'll want to hear more from after the book ends!

This was not a book that impressed me. The description sounded interesting so I agreed to read it. But from the very beginning the book seemed forced and contrived. I tried so hard to enjoy the story and ignore the whining of the main character, but I just couldn't get past it. If the author wanted sympathy for the main character I think he could have made him slightly less annoying and it would have helped quite a bit.

You have subscribed to alerts for Jack Wallen.

You have been added to Jack Wallen's favorite list.

You can also sign-up to receive email notifications whenever Jack Wallen releases a new book.