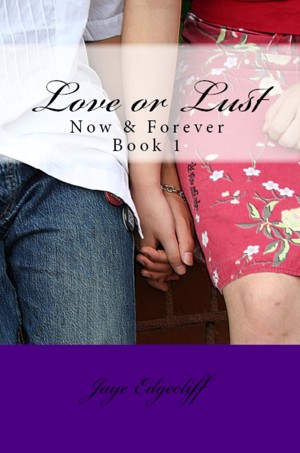 By Jaye Em Edgecliff
Rated 5.00/5 based on 1 review
The first book in the Now & Forever series: A sweet, slice-of-life, girl-meets-girl, romantic comedy about two young high schoolers who fall in love at first sight. More
The first installment of Now & Forever.

It’s a week before her freshman year when Lauren Conners is thinking, for what feels like the billionth time, of breaking up with her boyfriend of the past couple of years. In a seeming answer to her fervent prayers for guidance she looks up into the hypnotic eyes of the quiet little Washington town’s exotic, dark, and alluring new addition.

The two fall immediately for one another when their eyes meet. But Lauren can’t be sure – is this love at first sight? An answer from God to her prayer for guidance? Or is this simply lust as she wrestles with newborn passions and desires for the beautiful creature that has entered her life?

The relationship is fraught with other issues on top of the poor young ballerina’s internal and spiritual uncertainty: the two attend the best school in the area, a private school, Immaculate Conception, a Catholic school Lauren has attended since she was in sixth grade and where she has a reputation as a pious, studious, bright, Good Girl. So … what’s the problem here? Oh, her newfound love (or is it lust?) is a girl.
Available ebook formats: epub mobi pdf rtf lrf pdb txt html
First 20% Sample: epub mobi (Kindle) lrf more Online Reader
pdb
Price: $2.99 USD
Buy Add to Library Give as a Gift
How gifting works
Create Widget
Tags: romance romantic comedy lesbian young adult contemporary high school ya sliceoflife slice of life girl meets girl jaye em edgecliff now forever
About Jaye Em Edgecliff

I’m not including a picture for the foreseeable future because I don’t tend to consider myself terribly photogenic. I’ll be sticking with the fairy, for now.

Hi, I’m Jaye Edgecliff. I write teen romantic fiction. I live with my wonderful wife, our two very strange cats, and a hyperactive black-mouth cur. So, yeah, I’m a lesbian if you’ve a problem with that, I suspect you won’t like my books very much, but I hope you’ll try them anyway … you might learn something. I’m also a transsexual woman; not that it’s anything that ought to matter unless you and I are planning to get a bit sensual together, but I’ve come to realise that visibility and representation matter; maybe there’s a trans* kid out there who needs someone, anyone, to look to in order to believe that things can get better (believe me sweetie, they can if you do what you can to make it so).

That’s it. There’s not much else to say about me. Army brat Arkansan living in Georgia who grew up largely in Hawaii, Texas and Arkansas. I’m a college drop out who is a student of history (the specialty commonly referred to as Classical Studies … I love ancient Greek & Rome and used to be pretty good at Latin).

I hope you weren’t expecting much. I’m not into exciting sport, like rock climbing or surfing. I wasn’t on any teams in school. Hawaii is the most exotic place I’ve been (it is quite lovely, and a very different culture from the mainland, but I’m not sure how much I’m able to think of it as exotic), though I have seen wild dolphins and eaten sea urchin eggs from a sea urchin that had only been pulled out of the ocean less than a minute prior … and played tug of war with a wild octopus; that was a bit different. My hobbies are pretty geeky, I love to go to Marvel movies and Dreamworks productions, I love Michael Bay and J J Abrams films. I’m shy, quiet, and an odd mix of tomboy & girly – I suppose in that respect I’m a little like Salencia, but I’ve generally got better manners than her.

Maybe I ought to ask: What do people like to know about authors, anyway?

Politics? I’m in favour of anything that helps people, and couldn’t care less about helping the rich or the corporations … simply put, I’m a big fan of Bernie Sanders (I-VT). But you can kind of see that if you follow my Facebook or Twitter.

Race? Mixed, though mostly German ancestry so I’m fairly pale, but enough Cherokee that I’m darker than most people with my shade of red hair.

GCS? Why madam! We’ve not even been introduced! Let’s, at least, go somewhere to talk over some wine (white or blush only, I’m allergic to red) or coffee and get to know one another, first. As for the gents … sorry hons, not really that interested so you’ve no reason to find out.

Favourite football team? Whichever is wearing the most eye catching colours at the world cup, it’s the only time I watch the sport.

What do I read? Anything with really great characters, mostly. I favour SF/F, but I’ve read stories in multiple genres and enjoyed them so long as the characters were enjoyable. Which I define as having a good sense of humour, and feeling like they could be real people whom I could end up meeting and having a pint of Guinness with. This means a good number of Heinlein’s stories, Spider Robinson‘s, Ed Greenwood and Dennis McKeirnan, Elaine Cunningham. I like The Hobbit, but not Lord of the Rings; I found the Peter Jackson movies of the latter enjoyable, but started shouting epitaphs at the screen (iPad or computer, not in the cinema) at the previews for his treatment of the former.

Reviews of Love or Lust by Jaye Em Edgecliff

The story is exactly as described in the description. The two high school freshmen fall in love at first sight, and the book is about them questioning whether it's really love or if it's just lust and the complications they experience at things like a school dance due to being homosexual.

One of the things I liked the most about it was that most of the problems between the girls stemmed not from things like lusting after others or any of the other typical romance novel clichés, instead 99% of their problems stemmed from simply misunderstanding what the other meant. It reminded me of a romantic comedy, which, as far as I know, doesn't tend to be a WRITTEN genre.

There are things about it that may make it wrong for some people: Both sets of parents are rather open-minded even where their children's sex lives are concerned, and the girls are more mature acting than many, but by no means all, real world 14-year-olds. And a little bit of suspension of disbelief might be necessary to deal with just how quickly they fall in love -- but I think this is handled well since the girls themselves question it.

All in all, a very good book, and I eagerly await book two.

You have subscribed to alerts for Jaye Em Edgecliff.

You have been added to Jaye Em Edgecliff's favorite list.

You can also sign-up to receive email notifications whenever Jaye Em Edgecliff releases a new book.