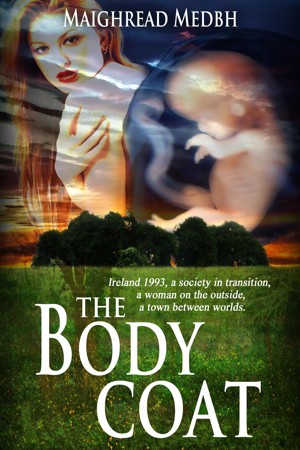 The Body Coat is a fantasy-realist novel, set in a changing Ireland fraught with unwanted pregnancies, religious scandals and revelations of family abuse. Jacqui Byrnes has been a victim and also carries a deep guilt. Defiantly beautiful, she is again abused by her husband and chooses a strange method of escape, offered by a town in which, as always, she's a natural outsider. But what's real? More
This is a story set in 1990s Ireland by well-known Irish poet, Maighread Medbh, who is the author of five published poetry collections and a literary study of solitude, Savage Solitude: Reflections of a Reluctant Loner.
The Body Coat is a novel in the fantasy realist genre, combining prostitution, murder, family abuse and community hysteria with New Age philosophies and traditional beliefs. The main character, Jacqui Byrnes, is trying to believe that she can set up a normal family life in a new town. Victim of an abusive childhood, she finds herself again exploited by her husband. Is it desperation that makes her buy into local beliefs in the supernatural, or are the strange happenings really the actions of the spirit beings who live in the hill? Either way, her life and those near her undergo complete metamorphosis in a very short space of time. The book begins with her diary, then pans out in third person narrative to involve other lives, the world of the Si (Shee), and the collective life of the town of Drumnashee.
Set during the economic recession of early 1990s Ireland, the atmosphere of this novel pulses with the controversies of the time: reproductive rights; teenage pregnancy; unemployment; political corruption; and abuse within religious institutions. In the tension between realities, we experience the transition from the traditional to the modern.
Download: epub mobi (Kindle) pdf more Online Reader
rtf lrf pdb txt
Price: Free! USD
Add to Library
Create Widget
Tags: fiction women child abuse ireland novel fairies mythology prostitution superstition folklore changeling si fairy lore fantasy realist irish fairies maighread medbh
About Maighread Medbh

Maighread Medbh was born in Co. Limerick, Ireland, and now lives in Swords, Co. Dublin. Widely known for her experimental approach to text and powerful performance style, she has been described as ‘a unique presence in the Irish literary scene’. Following her debut poetry collection, The Making of a Pagan (Belfast: Blackstaff Press, 1990), the conviction that poetry emerges from one’s body led her to experiment with musical rhythms and moved her towards dramatic poetry. In the nineties, much of her work addressed political and social matters, and was primarily published in dramatic form. During this time, she was also writing novels and other works.
Maighread now has seven published collections and a non-fiction work, Savage Solitude, which is a scholarly, dramatised study of the lone state, published by Dedalus Press in April 2013. Her most recent book, Parvit of Agelast, a verse fantasy, was shortlisted for the Pigott Poetry Prize in 2017. She's currently pursuing a creative PhD in DCU.

You have subscribed to alerts for Maighread Medbh.

You have been added to Maighread Medbh's favorite list.

You can also sign-up to receive email notifications whenever Maighread Medbh releases a new book.