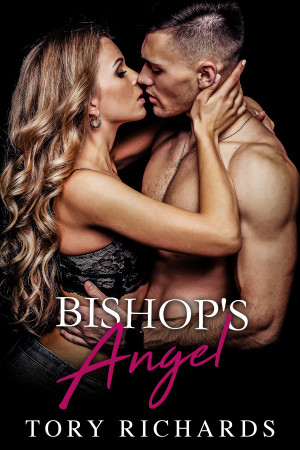 Rated 4.71/5 based on 7 reviews
A Navy SEAL for ten years, Bishop has seen a lot of fighting and bloodshed. On leave, he's ready for something good and sweet in his life. He's dedicated to his country but Angel, a pretty kindergarten teacher, makes him wonder if there's room for more in his life than just war. Will she be his salvation?

“No!” Angel cried out, struggling wildly against him. But she was no match for his superior strength and the honed muscles she felt beneath her hands. In no time his hands had wrapped around her wrists, and she was pinned against the stairs.

“Who the hell are you?” he demanded, his face too close to hers.

“Who the hell are you?” Angel demanded right back, twisting beneath him. It was then she felt cool air in places that she shouldn’t, reminding her that all she had on was a thin night-shirt and a pair of bikini panties. Judging by the super hard pecks she felt pressed against her breasts, her shirt had come undone, too. An insane thought crossed her mind, why he wasn’t wearing a shirt. She wiggled wildly, unintentionally scraping her nipples across his flesh.

“Stop before you get hurt!” he growled. In an effort to subdue her he pressed his body against hers.

“Then get off me!” Angel hissed, arching her body in an effort to throw him off her. His muscled thighs and powerful legs flexed against hers, easily holding hers still.

“Not until you tell me who you are,” he grated in a rough voice.

His warm breath slapped her in the face. “I live here,” Angel said without hesitation, glaring up into his shadowed face. She was aware there was no way he could see her because it was too dark.

How did he know that? “The police are on their way so I suggest you let me up and get out of here.” Her energy was beginning to wane. He was too strong and big, and the longer they remained like that, the more she began to feel uncomfortable with their intimate proximity.

“Good. Then we can get to the bottom of this.”

That wasn’t the kind of response an intruder would make if he were caught in someone else’s house. Maybe he was delusional or something. Angel decided to switch tactics. “These stairs are hurting me,” she said weakly.

Things grew still between them and she sensed his silent contemplation, as if he were wondering if he should believe her. She whimpered a little for good measure.

“Okay, I’m going to let you up, but don’t try anything stupid,” he warned.

The second he released her and lifted off her body, Angel got to her feet and dashed the rest of the way up the stairs.

“Son of a bitch!” he cursed behind her.

Angel slammed and locked her bedroom door in his face. She didn’t know what she hoped to accomplish, except to get away from him until the police arrived. What was taking them so long? She ran to one of the windows and opened it. Maybe she could push out a screen and—

Without warning her bedroom door was kicked in. She screamed and made a beeline for her connecting bathroom.

A muscular arm wrapped around Angel’s waist and she was lifted off her feet. “Let me go!” She wiggled and kicked, very much aware that her butt was against a very intimate part of his body. Burning heat replaced the fear flowing through her blood because his cock wasn’t as flaccid as it should have been.

“Look,” he slammed her down onto the bed and for the second time she found herself pinned beneath his superior strength. “Before this goes any further I think we need to talk.”

“You can talk to the police,” she panted, twisting beneath him.

“I intend to,” he said without hesitation. There was a confidence in his tone that surprised her.

Without warning he reached up and turned on the reading light at the head of the bed. How did he know that was there? Meeting eyes the color of blue topaz, everything in Angel froze, including her breath. Oh God, I know those eyes! She didn’t know the man personally, but she knew of him from the pictures on the fireplace mantle downstairs. He was Diana’s older brother, and Navy SEAL Bishop Strong. Suddenly everything made perfect sense.

Most of my books are available in paperback on Amazon.
I also offer some of my books in audio at Google Play only.

I absolutely loved this book

An excellent, steamy story with fleshed out characters that seem so real. My first book by the author, but I’ll definitely be reading more.

(reviewed 3 days after purchase)
marsha thalleen reviewed on May 11, 2015

Loved Bishop and Angel's story from page one. Short read for folks that don't have a lot of time...me, I wish it was longer. Of course, I'm a sucker for a soldier, fireman, cop or cowboy story, so there wasn't anything in this book not to like. Hat's off to Ms Richards for giving me an enjoyable story this morning.

This story immediately gets the reader involved with characters that you care about, a plot that keeps up its pace for the entire read and an ending that isn't rushed.
This is a short story that has been given the same care as a novel so it will satisfy your need if time is limited and you want something good to read.

This is a short, very sexy novel that grabs you from page one!

Angel Smyth is house sitting for her friend Diane and her husband while they are on a cruise. Angels home was being treated for termites, so the timing was perfect. Unusual sounds wake her in the middle of the night and she immediately thinks it's some type of intruder. She listens and is amazed at the nerve of the intruder, in the kitchen , making toast and drinking a beer......her beer! The police have been called, but suddenly she realizes he's in the room with her and panics, kicking and screaming and hitting him with her phone. Luckily the police arrive before damage is done to either Angel or her intruder. The explanations are made and Angel realizes her "intruder" is Diane's Navy Seal brother , Bishop Strong, who hasn't been home for six years. Angel has been infatuated with Bishop even though they have never met. His picture on the mantle, and the stories Diane has told her have turned him into Angels dream man.

Bishop Strong is a hardened Navy Seal with the scars to prove it. His explanation of his life is simple, "I live a hard life, Angel. No place to call home, except here on occasion. Some men like me don't get married, much less have permanent girlfriends." He hopes that explaining his life style to Angel will keep her from becoming too attached. The problem is he suddenly is unable to convince himself.

This novel is hot from the first chapter to the last. Bishop is constantly trying to deny what he feels, but can't seem to keep his hands off her. Angel is a kindergarten teacher with a very innocent persona, but underneath...... a wildcat!

I would recommend this novel to anyone who likes a steamy read that never cools off. I just wish it had been a little longer!

I received this novel from the author for an honest review.

You have subscribed to alerts for Tory Richards.

You have been added to Tory Richards's favorite list.

You can also sign-up to receive email notifications whenever Tory Richards releases a new book.