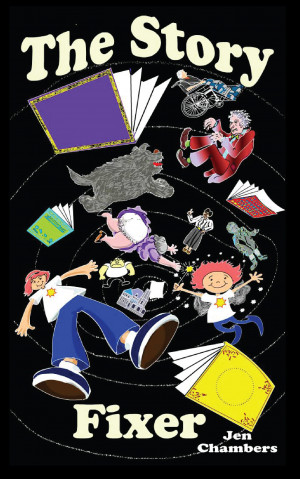 By Jen Chambers
Cassandra Knight does not do fairies! She does detentions! But when she meets Bertha and Midge (The Book Fairies) she finds out that a young boy who has been murdered needs her help. Cassie goes into the story, becoming part of it, and deals with some unusual characters in the town of Cyril’s Crossing…

A book for eight to 12 year olds. More
Cassandra Knight just can’t seem to get things right where school’s concerned. If there were awards for students who got the most detentions she’d win them all!

But when she receives a library detention one afternoon something magical happens. Time stops for Cassie as she finds herself in the world of The Book Fairies, whose job it is to complete stopped stories. The Book Fairies need her help. They have waited a long time for the right person to come along and Cassie, it turns out, is just that person. Cassie doesn’t believe in Fairies at all. She left them behind when she was in kindy and she doesn’t do fantasy but when the Fairies explain their problem Cassie decides that it just might make a very boring detention a little less boring.

She agrees to help and so the adventure begins.

The Fairies drop Cassie into the stopped story of a murdered boy where she meets a strange mixture of characters and becomes a part of the story herself.

She finds herself caught up in a world of injustice, corruption and just the odd bit of evil. How she manages to get the story started again is what this book is all about.

So join Cassie in her first adventure as “The Story Fixer” and share her journey.

The Story Fixer is a story of magic, fantasy, hope and possibility.

The author is a teacher and a writer who has always been a kid at heart, so this story is suitable for middle to upper grade primary, or kids around eight to 12 years of age…and adults who find they need to touch base with their inner child every now and then!

Jen Chambers was born in another century, in Grantham, UK.

Grantham is famous for:
1. Isaac Newton
2. having the first female policewoman in England
3. having one of the only remaining chained book libraries in the world
4. being Margaret Thatcher’s birthplace and, of course,
5. Jen.

After a shaky start to life involving a war, adoption, a children’s home and a long journey overseas, which meant leaving school behind, Jen worked in factories, dental surgeries and dog kennels.

Later she worked as a jillaroo in the Australian outback and as a governess near West Wyalong, where she actually had an old school building to “teach” in. Her story "A schoolday in every way but normal" was actually inspired by her experiences in that old Victorian schoolhouse.

Jen even drove a truck for a while. And after she ran out of jobs she decided to become a teacher.

She’s been teaching on and off, here and there and this and that now for about 30 years.

And she’s been writing ever since she could crawl over and “write” on misted up window-panes on cold winter days.

Jen has quite a few stories that have brilliant beginnings but that are just waiting for the Story Fixer to work on.

You have subscribed to alerts for Jen Chambers.

You have been added to Jen Chambers's favorite list.

You can also sign-up to receive email notifications whenever Jen Chambers releases a new book.