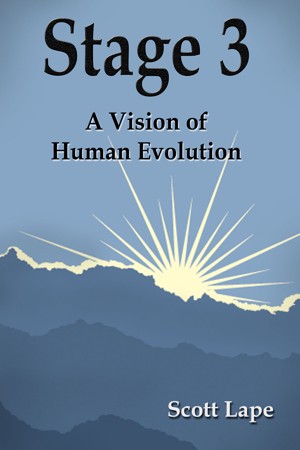 Stage 3: A Vision of Human Evolution

By Scott Lape
Rated 4.00/5 based on 1 reviews
Is there hope for the human race? This book answers that question with a resounding "Yes!" The author presents a model of consciousness evolution in three stages, and applies the model to explore psychological and spiritual growth both in individual persons and in society as a whole. The book culminates in a hopeful vision of a world of peace and plenty for all. More
At this time in human history we are faced with tremendous environmental, economic, and social challenges. It is becoming clear that our present way of life is not sustainable, but changing the course of civilization can seem an impossible task. This book offers hope. The author suggests that humanity is beginning a process of conscious evolution that will, with luck, enable us to solve our problems and create a world where every human being lives a full, rewarding, and self-actualized life.

The book presents a model of consciousness evolution in three stages, and applies the model to explore psychological and spiritual growth both in individual persons and in society as a whole. The three stages of consciousness can be described as body, mind, and spirit, and the author gives examples of how each stage of consciousness may manifest in the individual as well as in society. He argues that the human race is moving into Stage 3 consciousness, where we are no longer blinded by our mental constructs, and are able to re-make our society so that it serves people and the living world. The book culminates in a hopeful vision of a world of peace and plenty for all.
Download: epub mobi (Kindle) pdf more Online Reader
rtf lrf pdb txt
Price: Free! USD
Add to Library
Create Widget
Tags: spiritual growth consciousness body mind spirit human evolution positive future evolution of consciousness future of humanity ecopsychology conscious evolution peace and plenty for all
About Scott Lape

Scott Lape is a writer and singer-songwriter. He lives in Chico, California with his wife and daughter.

Scott Lape wants to awaken us to the evolutionary phase-change going on all around us. He calls us to join up, get aboard, swell the crowd, walk with him and others into a new world.

He says the signs are all around us, plain for everyone to see, that we are about to move beyond a phase of human history built on an impaired, a divided human consciousness. The world is too much divided into self and other, us and them, dominant and submissive. It's a world run by systems with lives of their own destroying both the human race and the earth. He calls this Stage 2, "mind consciousness."

Before that, during our hunter/gatherer days, "we lived in direct contact with Nature, in what I call Stage 1 or 'body' consciousness. We belonged without question to the flow of fire, water, earth, and air, with no awareness of separation from each other or the living world" (p. 7).

Growing numbers of people, Lape points out, are moving on into "sprit" consciousness, enjoying a new level of freedom and creativity, and slowly building the infrastructure of a Stage 3 world, "a world in which every human being can flourish, a society that exalts humanity and nature both" (p. 97).

It's an old-fashioned kind of book in a way, maybe in the tradition of Tom Paine's "Age of Reason," declaring that the king is dead and warning tyrants that their days are numbered. Lape does some cheerleading for this new day that is about to dawn, and occasionally his enthusiasm carries him over the top, but the positive mood, and the enthusiasm, is very refreshing at this cynical time.

We need positive messages, and Lape provides us one. This is a solidly built little book and pretty well guaranteed to raise your spirits.

You have subscribed to alerts for Scott Lape.

You have been added to Scott Lape's favorite list.

You can also sign-up to receive email notifications whenever Scott Lape releases a new book.