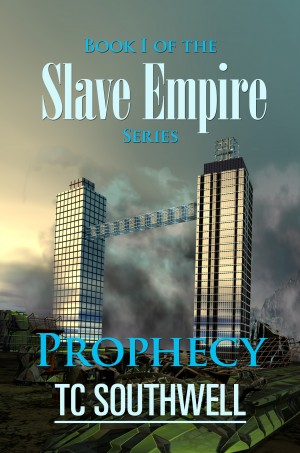 From a dying Earth to worlds out there, Rayne finds herself hunted due to an enigmatic prophecy. She is sold as a slave, and seeks escape. This is an excellent read. The descriptions of Earth in death throes are quite numbing – it’s something that could happen to our world. But the worlds out there are imaginative and you just have to read on to find out what’s in store for Rayne and her brother. My personal favourite is the being known as the Shrike!

Readers of scifi/fantasy will lap this up, I have no doubt. Definitely recommended!

(review of free book)
Mark Sloan reviewed on June 30, 2014
(no rating)
This may be the best book that I've read from Smashwords. It is well written with a story line that keeps one's interest. Superior science fiction.

(review of free book)
Vanessa Finaughty reviewed on May 20, 2013

Slave Empire is a little different from Southwell’s other series, and, while I thoroughly enjoy all this author’s writing, the difference makes for a unique reading experience that will almost certainly leave you wanting more.

The prophesised golden child who will save a gigantic galactic empire is trapped on a dying Earth, searched for by friend and foe alike. Rayne has never heard of this prophecy, and her priority each day is to find food and stay alive – not save an empire she’s never heard of. It’s anyone’s guess how she will react to being abducted by her saviours.

A brilliant read that kept me reading – just be prepared to purchase all the books in this series, because you’re bound to enjoy this one that much.

I have my doubts about this book up to one fourth of the book but after that it get exciting and I can't put it down.I think it will be better if there is more of the heroine's learning about her abilities.

Love this series! It's one of those stories that you just can't put down. Fast-paced and exciting and one twist after another.

I am enjoying the series. I enjoyed Prophecy so much, I bought the next two books. I only give 5 stars to books that keep me up at night, and I cannot put down, but I will probably finish this series. This series is well written and very imaginative;makes for a very entertaining read.

(review of free book)
ticup reviewed on Sep. 16, 2011
(no rating)
Loved it!! First time I've purchased the next book in a series after reading the "freebie". Not a "complex" Sci Fi, but an easy reader I kept picking up. Keep 'em coming TC!!!

I've found this series (Slave Empire - I've read the first two) a little different from the other books. It seems more scifi, I guess, than... whatever genre the others fall into. I wasn't fond of it.

The writing is, as always, very good, and lots of what should no doubt be exciting things happen, but there is little interaction between the two main characters. What there is a lot of is interminable descriptions of ships and weapons outer spacey stuff and probably other stuff, too, that I just don't remember. Or that I skipped over. The underlying story is interesting but... well, maybe I just wasn't in the mood for this sort of presentation of it, or something.

But then, the first book was setting things up so I went ahead and bought the second book -- where, again, there was little interaction between the main characters and lots and lots of describing of the innards of a living ship. And other stuff. A lot of which I skipped over. Real interaction between the two main characters comes only at the end of the second book and then, whoops! It's time to buy the third.

For the first time, ever, reading a TC Southwell book, I was bored! Gasp.

Others found this series fascinating, as the reviews will attest, but if you are looking to get delightfully ensnared in Ms. Southwell's web of "gotta keep reading, have to know, oh my gosh I love these characters, where is the next book!?" type of reading experience, I would go for one of the other series of books.