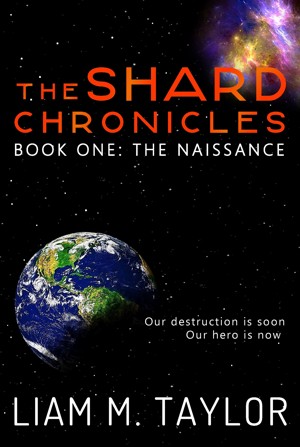 The Shard Chronicles - Book One: The Naissance

By Liam M. Taylor
Rated 5.00/5 based on 8 reviews
Our destruction is soon. Our hero is now. Pain. Fear. Suffering. Annihilation. Not just Earthly attributes. Prepare. Something has found us. Brought to our planet a long time ago. By a human. More
A mild quake struck the exact moment Austin Cooper was born. When he was two years old an unidentified man saved his life, and he was five when the man guided him during his first use of a remarkable ability. At age seven, the man told Austin the talent he had was unique among anyone else in existence, and given to ensure his role as future protector of an ancient and powerful artifact. Later that day, the man departed Earth, taking the object he had possessed for centuries and leaving behind a world condemned to destruction by the brooding, alien malevolence it contained.
Now, Austin matures with the understanding that no one else has the ability to manipulate time, to move through it at a different level, a different speed. No one else can simply disappear to a place far away, a parched, bleak, and inhospitable wasteland. The trouble is, neither should Austin. Without control of the artifact, he has achieved the supposedly impossible, and revealed himself to another realm, to others that require him, preferably alive, but dead would suffice.
Things just aren’t getting any easier for Austin. There are the seemingly real and vivid dreams that have plagued him over the years, his ongoing struggle to keep the truth from his loving family, and the prospect of all-out war with a vengeful school bully, intent on destroying the only person able to defeat his cruel and callous deeds.
Well... take a number and get in line.
Half the Universe is already waiting.

A New Zealander by birth, Liam came into this world in Auckland, the City of Sails, on a sunny December day in 1967, to an English mother and Kiwi father.
From an early age, he loved books, especially anything to do with science fiction/fantasy, and on the weekends, in a time before personal computers, video game platforms and social media, this often led to ‘Lord of the Rings’ style battle re-enactments around the wooded areas of his hometown.

Throughout his schooling, even extending into his formative years, he held something close to his heart... a burning desire to write, fueled by various comments and accomplishments in English and one special competition win at the age of nine. However, the shadow of an antiquated belief that a son must follow his father’s vocation, coupled with some extraordinarily bad advice, influenced that naïve adolescent into a variety of unfulfilling jobs.

Eventually, he left the shores of his country and ventured out into the world... to the birthplace of his beloved mother, England. It was there, based in London and later Reading (actually pronounced Redding. Still, coincidental? Or perhaps a twist of fate?) that his life really took off, and he met many an amazing person and experienced many wonderful events on his travels around the globe. Yet still, he pushed away his true yearning, thinking that the opportunity to write was lost… even with all the great ideas that leapt into his mind, urging him to expand upon their fledgling concept. Write about me, they would say!

After moving to Queensland, Australia, he reconnected with a special person from his past... a special person he loves, admires, trusts, and who has given him the second thing he thought he would never have – two beautiful children. A special person who has been the key to his lock, his light, his beacon, through the darkest of hours. Inevitably, bleak days lay ahead, with the same old rut rearing its extremely ugly head... made worse by certain individuals both personally, and professionally.

But Karma, in all its infinite wisdom and consequences, had a plan. And on a night in November 2009, wrapped in despair, that plan slammed into his mind with the force of a Rocky Balboa roundhouse.
Write, Liam Taylor… write.

You see, wonderful readers, there’s a reason for everything that happens, and with an abundance of life’s experience and knowledge under his belt, so begins his journey, his real calling, on a thought that never left the inner recesses of his mind, a thought that began on a delayed train from Reading to London’s Paddington Station in 2002, and a thought that grew with every passing rumination.

Now, The Shard Chronicles is well underway, and he is an awfully busy man... juggling family life, his true career, and all the while completing a Diploma of Professional Writing. He’s loving every minute of it!

Ok, i'm ADDICTED!!
What a fantastic read. I'm so glad I had it downloaded on my iPhone because I was able to read it whenever & wherever I wanted to.
The way the author has written this is very simple but captivating. You know what the characters are thinking, feeling, doing etc.. But you also want to know more!
I could easily see this translating to the big screen one day and it deserves a wider audience!!

An interesting tale, one I think is in a style of Sci/fi of its own as it has story elements from all different genre's, all bending well together.
I look forward to the seond book and hope to once again be impressed by this Author, who has a flare for words and story telling. WELL DONE!!!!

As a reader who is not normally a fan of Sci-fi, i loved this book. It has a great story line and is extremely well written. Clearly an author with amazing talent when it comes to writing, using language to really enthrall the read and make the novel impossible to put down. A totally spell-binding novel that leaves you wanting more. Cannot wait for book two, which im sure will prove to be even more exceptionally written then the first. Great work Liam !

So when is the next book due?

OMG!!! Wow, this is sooo good. I couldn't put it down. Hehe, it's funny, romantic and action packed. I would definitely recommend it to everyone and my friends. I LOVE IT!!! GREAT WORK. I can't wait for the next book :)

BEST BOOK EVER! I just couldn’t put it down. I have fallen in love with the Cooper family and I adore Jeff’s jokes. The descriptions were so detailed; I could imagine everything – from the beautiful Crescent Lake to the details of a character. It was well-written and I would definitely recommend it to all of my friends. I can’t WAIT for the next book in the series to come out, so that I can drown myself in the world of Crescent Lake, Colorado and the life of Austin Cooper. I think I might read it again; it’s that good, I will read it again for the second time!

I absolutely loved reading this book. I just couldn’t put it down. The descriptions used in the story were great, I was really able to picture everything. I have fallen in love with the Cooper family and Crescent Lake and I can’t wait for Book 2. Definitely the best book I have read in a long time.

WOW Liam, what an awesome book! I just finished it and loved it! I couldn't put it down - what a page turner!!! I need the next one, QUICK!, before I burst!!! Well done you!

You have subscribed to alerts for Liam M. Taylor.

You have been added to Liam M. Taylor's favorite list.

You can also sign-up to receive email notifications whenever Liam M. Taylor releases a new book.