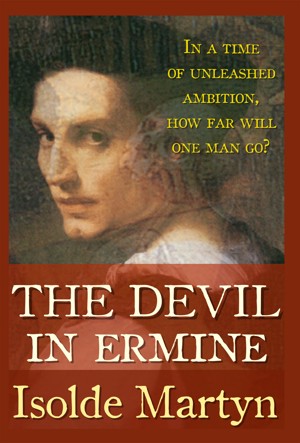 The Devil in Ermine

1483 THE ENGLAND OF RICHARD III
Harry, Duke of Buckingham, decides to oppose the White Queen, Elizabeth Woodville, and help his cousin, Richard of Gloucester seize the crown.
In this novel of ruthless political intrigue, award-winning novelist Isolde Martyn brings out from the shadows two of history's most enigmatic men: King Richard III and the friend he trusts beyond all others. More
The England of King Richard III
1483: the country has a new king – a mere boy – but who is to rule the kingdom until he comes of age?

Harry, Duke of Buckingham, faces an invidious choice: support the White Queen, Elizabeth Woodville, or back his cousin, Richard, Duke of Gloucester. Whatever he decides will make him a traitor to someone. Meanwhile, with royal blood pulsing in his veins, he has his own dreams.

Eloquent, handsome and as two-sided as a dagger blade, Harry knows it will take a man of exceptional cunning to play the powerbroker of the realm. Does he have what it takes? He thinks he does, but time is short and danger everywhere.

But can you believe everything that Harry tells you? Is he a true villain or a perfect friend?

The late fifteenth century has been a lifelong interest for Isolde since she was fourteen and she has an old fashioned History Honours degree specializing in Yorkist England. Four of her books have been set in the Wars of the Roses. She is co-founder and currently chair of the Plantagenet Society of Australia and a former chair of the Sydney branch of the Richard III Society.
Her debut novel won major prizes in the US and Australia.History has dominated much of her career but her other hat is editing and she was a senior book editor with a major international publishing house before taking up writing full time.

Reviews of The Devil in Ermine by Isolde Martyn

You have subscribed to alerts for Isolde Martyn.

You have been added to Isolde Martyn's favorite list.

You can also sign-up to receive email notifications whenever Isolde Martyn releases a new book.