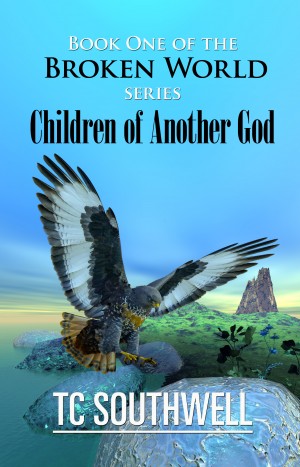 The Broken World Book One - Children of Another God

By T C Southwell
Rated 4.44/5 based on 9 reviews
When a young peasant girl is injured while hunting, she meets a strange, magical man who is a member of a despised race – Mujar. Truemen scorn the shape-shifting unmen for their odd, humble ways, and envy their power over the elements. Now a scourge is sweeping the land, armies of mounted warriors who cannot be defeated are wiping out Truemankind without mercy. More
Mujar do not use their powers for good or evil, they simply exist, immortal and apparently purposeless. The mounted warriors are known as the Black Riders, but no one knows where they come from or why they seem bent on exterminating every man, woman and child. Talsy uses her father’s knowledge to trap the Mujar with gold, which has an odd effect on them. Her father intends to throw him in a Pit, from which he will be unable to escape.

Talsy does not believe the Mujar deserves such a fate, so she frees him and begs him to take her with him on his journey. He agrees, and they set off across Shamarese, continuing his quest to find an old hermit’s lost son. There is far more at stake than Talsy realises, however, and she has innocently stumbled upon the last free Mujar, who has the power to decide the fate of her race…
Download: epub mobi (Kindle) pdf more Online Reader
rtf lrf pdb txt
Price: Free! USD
Add to Library
Create Widget
Tags: forest spirits alien world stone warriors immortal hero shape changer retrtibution and redemption elemental powers wind spirits earth spirits
About T C Southwell

Talsy, the female lead can be a little irritatingly stupid. But she's young. I hope as the epic continues her character also develops and matures.

Other than that minor gripe, this story reminds me of Hayao Miyazaki's work. The scenes with the Kuran in particular reminded me of Princess Mononoke. I hope this story gets picked up by a producer and turned into an epic anime.

Although I loved the story I find that I'm not too keen on buying the next book because of Talsy's juvenile behavior that I can't really identify with. Maybe I'm just too old to relate.

Frankly she was fine until the last few chapters with Kieran where she became ridiculously irrational. Calling someone an oaf for trying to help you for FREE, but championing a mujar that you had to hurt first before they'd help you was way out of character for a being a "chosen one." I thought she was deemed worthy because she dosn't judge and there she is being such a brat.

Although I think the insinuation of a love triangle would raise the tension a bit and make things more interesting for younger readers, I'm not looking forward to more of that behavior in the next book so for now I'll pass.

I enjoyed the writing and new ideas, but I found the characters very frustrating at times, so I rate this 4/5.

I'm intrigued enough to purchase the next book.

(review of free book)
RichNKatiesMom reviewed on on April 11, 2012

Loved this book and the new interesting and vibrant life that was described. I love this series and all the books that she has written.

This book gives me thoughts about humanity.I love all of the book especially the heroine.

(review of free book)
Sheila Whithorn-Farrell reviewed on on Sep. 7, 2011

I enjoyed this book but had a hard time with the main female character she keeps deliberatly endangering others for her own reasons not thinking beyond the imediate. Well written and developed as all ways

I enjoyed the author's writing and imagination, but was annoyed by the blatant and oversimplified Christian imagery (salvation and the fundamental unworthiness of men, not the general spiritual message). The book would have benefitted by a race of men more complex than a pack of dogs. I am considering giving book 2 a chance anyway, because I do believe the author is talented, but if it turns into a sermon on how unworthy the masses are compared to the "chosen" it will by my last from this author.

(review of free book)
Vanessa Finaughty reviewed on on July 16, 2011

Aside from the Queen's Blade series, this is my favourite series from this author. No one else I know has close to the imagination this author does, and I end up losing sleep because I can't put the book down!

(review of free book)
Maria Sokolova reviewed on on June 5, 2011

Amazing!I admire author's imagination and spirit!I Recommend it! Almost read all her books, a few remained.

(review of free book)
Taruna Lamba reviewed on on Dec. 19, 2010
(no rating)
just downloaded going to read in night or may be next day