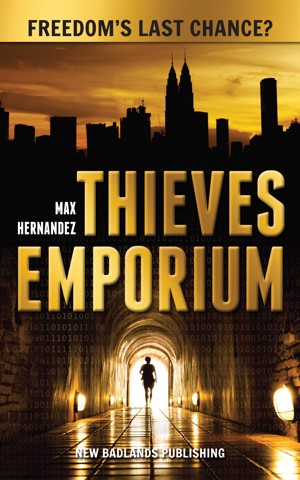 By Max Hernandez
Rated 4.73/5 based on 11 reviews
A novel of technology, economics, and death in the age of the surveillance state.

What price freedom when the government knows all our secrets? More
A novel of technology, economics, and death in the age of the surveillance state.

What price freedom when government knows all our secrets?

Fawn got to the shelter too late for dinner, so she curled her small family into a dark corner, hoping only for a safe place to sleep. But a quiet stranger had approached her out of the darkness with a gift.

Now she had a way out of her poverty. In her hand she held a ticket to a new world. One filled with opportunity.

Dare she use it?

Welcome, Fawn, to a place beyond the reach of any government, a world without laws or regulations of any kind.

Where everyone is free.

But no one is safe.

Welcome to the New Badlands.

This is the story of a young mother's attempt to survive in a new digital underworld. Follow her as she becomes a pioneer, a smuggler, a spy, and a freedom-fighter while dodging forces that threaten to destroy the very foundations of the modern nation-state.

The characters in this novel are fictional. But the technology is real. So is the place. It's growing around you, right now. Like cracks in the armor of the new surveillance state.

Read about it while you still can.

Warning: Three pages of this work contain graphic depictions of sexual, physical, and emotional abuse. Use caution when distributing this work to anyone under the age of 18.

The author welcomes thoughts, suggestions, and criticism from readers of his book. He can be reached at MaxHernandez@protonmail.com

Disturbing, but most of it is already true. If the technology is there, it will be used as described. The FEMA camps will be up and running soon. The Dollar is about to tank.

You must read Thieves Emporium even if it will not comfort you.

The revised version (April 2014) is an improvement over the 2013 version. A filediff of the two epubs shows over 5100 edits. Most obviously, the current cover picture is much more appropriate to the content. That's not a major issue, but the old cover irritatingly gave an incorrect impression of the story. The new version has an additional appendix on the principal features of money (fungibility and total quantity). There are many very minor edits (mostly dialogue), which makes the conversations between characters flow more smoothly than in the 2013 version. The overall story is the same, just slightly more polished.

I still have a quibble about certain witnesses being allowed to live long enough to record their testimony. It would be more likely that they would be promptly killed by a house fire, car crash, drug overdose, or other "accident" with plausible deniability. That's a very minor issue, and their their survival was necessary to the story. Overall the book was excellent, and very good value for the price.

(reviewed 9 days after purchase)
resonant reviewed on Nov. 24, 2013
(no rating)
Interesting, and disturbing.

Frankly I do not know how to review this book . It is interesting and has good information but at the same time a lot of distortion which turned me off. But I recommend thinking readers to read it ,I will reread it for a better understanding.

Everyone else finished the book before I did, so I'll just confirm that it kept me up late, and the review I was about to write noted the similarity in style to Harry Harrison's "Stainless Steel Rat" books.

II hope to read more about the characters.

There are some passages that are thinly disguised tutorials on tech and economics, which might be oversimplified for some people, however, this book is described as a Young Adult novel, so I think the extra exposition is appropriate.

One has to wonder how our government can stray so far away from the “Noble
Experiment” which the founding fathers instituted for this great country.
The father’s basic idea was freedom, not restrictions.
The thesis of Thieves’ Emporium is rebellion against oppressive governmental
snooping.
President Reagan said--- “Get government off the backs of the people.”
This story needs to be told.
Joseph Petree
October 1, 2013

A cross between "The Stainless Steel Rat" and late 1990's internet sites of Dodge and LF City. Plausable. Tech first favors those that can afford it in size (gov and corp), and later favors individuals who embrace it. The time is coming. I'm just a few chapters in, but so far the story is well done.

This book presents a plausible view of a dystopian future not too far removed from the present. The world revealed in this book is the product of two trends that have been ongoing for an extended period time, namely the nation's economic decline and the erosion of civil liberties.

It is very timely, given the Patriot Act with it's extrajudicial assassinations and suspension of habeas corpus, the recent revelations of politically motivated abuses by the IRS and the government's electronic eavesdropping program run amok. The FEMA camps described in the book don't seem quite as far fetched as they might have just a few years ago.

Review by: jack biles
The opening plot kept me reading till i had to pee. Finished it late that night. It kept me reading the boring tech stuff, and i learned alot. Can people really hide in the internet like this? Can i?
I was sad when the book ended, but i've been following up the leads in the appendix.
(review of free book)

As the pendulum swings Left, consider the erosion of your Liberties. There are countermeasures. This is a great read particularly if you want to be knowledgeable of these subtle and not so subtle affronts to Liberty and just what countermeasures you can employ.

You have subscribed to alerts for Max Hernandez.

You have been added to Max Hernandez's favorite list.

You can also sign-up to receive email notifications whenever Max Hernandez releases a new book.