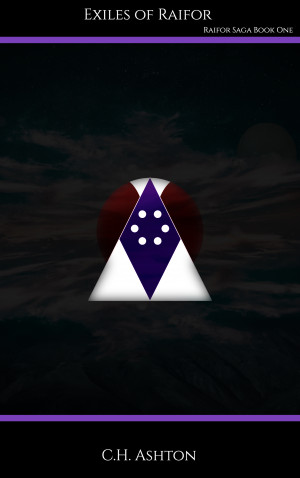 By C.H. Ashton
Exiles of Raifor is an fast paced Action-Adventure novel which blends both Science Fiction and Fantasy elements. The result is an adventure filled with magic, spaceships and a diverse and interesting cast of characters. More
The Cataclysm devastated the galaxy. It destroyed worlds and wiped out entire species. That was over four hundred years ago. It ended in the unification of the galaxy under one rule. Thus the Great Eternal Empire of Raifor was formed. At its head sat the Nobles, descendants of the First Emperor imbued with powers that not even the Magus of the seven orders could hope to match. For millennia they have followed a strict system of succession. Now, for the first time since its inception, that system has failed and war has returned to the galaxy. It is up to the Exiles to make it right.

On the backwater planet of Erelia the war has already taken its toll. Aosen Yenra waits in a bunker with the thousands of civilians he’s managed to save from the nuclear bombardment of their world. Radiation threatens to kill the survivors slowly, and time is running out. His search for answers will lead him to an ancient ship, and the secrets held within.

Bach-Ti the Pirate Queen has just organized the grandest heist of her long career. The war, however, will alter her journey in a way she and her crew could never have expected. Someone wants the Pirate Queen dead, and she won’t rest until she finds out whom.

Meanwhile on the planet Navia, the young heiress Lanoel Rai Devroux is also waiting for someone to rescue her from her responsibilities. When the deposed Empress arrives on her world she brings with her something that will change Lanoel’s life forever. But is it a blessing, or a curse?

Iloesten Rai Kenos is a woman renowned for her brilliance in battle, and her cruelty. She leaves no survivors, and takes no prisoners, but she must do more to prove herself as something greater than a kinslayer. When she learns of the fabled relic ships, she believes she has finally found the answer. Will her thirst for power be quenched, or will she again fall short of her goals?

These are the Exiles, and this is their journey. They must trust those around them to achieve their goals, and most of all they need to trust in the aether.

Lose yourself in the universe of Raifor, where magic and science meet. Exiles of Raifor is an action packed blend of science fiction and fantasy that is sure to leave you wanting more. Explore new worlds, meet new characters, take part in an adventure which spans an entire galaxy. Enjoy the debut of a new name in Science Fiction and Fantasy.