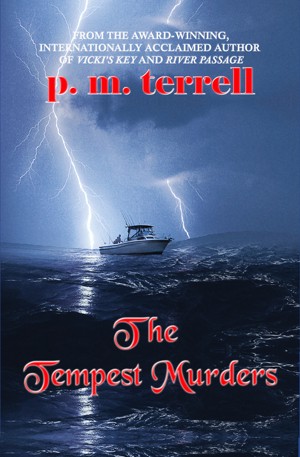 By P.M. Terrell
Rated 4.50/5 based on 2 reviews
Detective Ryan O’Clery is working a series of homicides identical to murders that occurred half a world away and two hundred years earlier. As Hurricane Irene barrels toward the North Carolina coast, he realizes the real target is the woman he’s fallen in love with. Can he stop the killer and save her life or is history destined to repeat itself? More
Detective Ryan O’Clery is working a series of homicides when he discovers a journal kept by an uncle five generations earlier, detailing the same type of murders as the Night of the Big Wind swept the Atlantic Ocean across Ireland in 1839.

As Hurricane Irene barrels toward the North Carolina coastline, Ryan discovers even the killer’s description matches exactly. And as he falls in love with television reporter Cathleen Reilly, he begins to wonder if she is the reincarnation of Caitlyn O’Conor, the woman lost to the killer as the storm raged in Ireland—and if he is the reincarnation of Constable Rian Kelly.

Reviews of The Tempest Murders by P.M. Terrell

In Lumberton, North Carolina, Detective Ryan O'Clery is working a series of homicides when he comes into possession of a journal kept by his great-uncle, five generations earlier. In his writings, Constable Rian Kelly details an eerily similar set of murders that he is investigating in Dublin, Ireland, during 1839. The number of victims steadily increases - until the night of January 6, 1839, when the 'Night of the Big Wind' swept the Atlantic Ocean across Ireland - completely devastating the country.

As Hurricane Irene barrels towards the North Carolina coastline, Ryan O'Clery discovers that even the killer's description that Rian Kelly mentions, matches exactly Ryan's prime suspect for the homicides in North Carolina. And as he falls in love with television reporter Cathleen Reilly, he wonders if she is, in fact, the reincarnation of Caitlyn O'Conor - Rian Kelly's fiancee, and the suspected final victim of the killer - lost as the storm raged across Ireland.

Ryan is in a desperate race against time. For, if reincarnation is possible, then Ryan suspects that he may just be the reincarnation of Rian Kelly. Now, he must rescue Cathleen before the killer finds her. Or risk losing her forever, as history appears destined to repeat itself.

I thoroughly enjoyed reading this book. As I've said before, I do like stories that have paranormal overtones to them, and mysteries of any kind woven throughout storylines certainly intrigue me. I also like reading stories that are in any way connected to Ireland. I was originally born in Belfast, although until I was about four years old, my family and I lived in Dublin. Anyway, I give 'The Tempest Murders' by P. M. Terrell a definite A+! and look forward to reading more from this author in the future.

I just wanted to mention something that happened that surprised me: I had just finished reading this book, and was telling my mom about it. I was explaining how part of the story took place during the 'Night of the Big Wind', when I noticed that my mom was looking at me sort of curiously. I stopped speaking, and she picked up a magazine off a stack of Irish magazines that had just arrived in the mail the day before. The magazine was an issue commemorating 175 years since the 'Night of the Big Wind'!

The is the first book that I have read by p.m. terrell, though I have had my eye on her Black Swamp Mysteries for awhile now.This stand alone seemed like the perfect way to get a feel for her writing style before committing to the series. I am super glad that I did, and will be adding her other books to my TBR pile.

This story opens January 7th, 1839 in Ireland. Rián Kelly has just arrived back home after a horrendous night of traveling through the elemental equivalent of the nine circles of Hell. Rián is a constable who has just returned from a trip to Dublin on business. Unfortunately, he arrives home to late to save his true love Cait from a killer.

Chapter 2 brings us to roughly present day (2011) North Carolina and we meet Ryan O'Clery as he wakes from a dream of Rián and Cait. Ryan has had these dreams his entire life and Cait is as familiar to him as his own face reflected in Rián's. Ryan is a detective working a serial killer case. Little does he know how close upcoming events will mirror the dreams that haunt him every night.

I do not consider this book a Time Travel novel. None of the characters travel back in time. Yes, the main character has dreams of what could be interpreted as a past life, but he doesn't actually go back in time. The two couples live parallel lifes, but to me this isn't the same as time travel. So if that is the only thing holding you back from picking up this book, just strike that excuse off of your list. ;)

I really enjoyed this book even though it was told almost completely from Ryan's perspective. Or maybe because of it. It is rare for a romance to be from the male's pov. It lent and unexpected flavor to the story that was very unique and intriguing. I gave this book 4 stars on Goodreads.