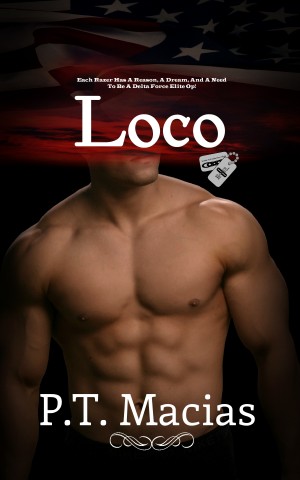 Rated 4.67/5 based on 3 reviews
The loss of his parents and love destroys the warrior. These events nearly drive him insane. The mission throws him into the arms of his soul mate. The unexpected forces push and transform him into a fearless warrior. More
Razer 8 takes you into the world of organized crime, kidnapping, politics, military romance and suspense thriller. Razer 8 Delta Force operatives are full of passion. Enjoy these amazing passionate men, a thrilling ride, and a dash of love.
Loco aka Roberto ~
The hard driven, ambitious delta force elite operative is immune to women. His heart has been destroyed by a treacherous woman and the unexpected loss of his family. These events have driven him nearly into insanity. The hard knocks in life propel him into grasping his emotions, his thoughts, and his physical condition. He focused on his goal. Loco doesn’t allow any type of distractions or obstacles to stop him. His actions and recklessness have earned him his nickname, Loco.
The Infinite power, Razer 8 operatives, are united and linked for infinity. His team mates recognize his pain, anger, and strength is derived from the intense impotency he feels from his loss.
The unexpected mission and unexpected encounter with his soul mate, tests his strength. His mind, heart, and soul recognize his love even before the actual encounter. The ruthless criminals threaten to harm his soul mate, pushing and transforming him into a fearless warrior.
Download: epub mobi (Kindle) pdf more Online Reader
lrf pdb txt
Price: Free! USD
Add to Library
Create Widget
Tags: romance romantic suspense short story thriller suspense free series action and adventure contemporary romance multicultural romance military series
About P.T. Macias

About The Author P.T. Macias

I live in California with my husband and children. My grandkids are my treasure. When I am not writing, I enjoy going on cruises, concerts, eating white peaches, pistachio ice cream, and sipping margaritas.

I love sexy dark alphas, angels, gods, vampires, werewolves, dragons, and other entities.
I always dreamed of writing paranormal tales that are full of love, incredible sexy wild men, mysterious realms, and a dash of suspense.

Love Me, Stalk Me!

I really enjoyed this book. I love the style of writing. I enjoyed how much She voiced the thoughts of the characters. It was unique and very suspenseful. I enjoyed the dance that they went through at first till they couldn't control it anymore. I believe that the characters of the story were well descriptive and they really lived up the their expectation.

A fantastic book. Claudia and Loco were great together. Can't wait for the next book!!!!

(review of free book)
lori roughton reviewed on on Oct. 1, 2013
(no rating)
These book draws the reader into a sexy world of the government. Loco is strong and sexy and Claudia is the same. When the two are thrown together it is explosive.

I downloaded this as a free book because I was introduced to the author through one of my facebook groups. I have never read or heard of her before.

She definitely has her own unique writing style and I found that I liked how she voiced her characters thoughts as they were happening. So it is definitely contemporary.

Because of the Mexican and Spanish influences in her writing for the most parts she has translations of the words in parenthesis which is very helpful. However some words were missed so brush up on your language skills. What I found most difficult was the masculine and feminine forms because I couldn't remember if men just used the masculine and women used feminine so it was a bit confusing. Also I found small editing issues one being a switch from Chavez into Chaves. Just minor little things that in no way detracted from my enjoyment of this story.

I wished that the story showed Claudia in action as a strong female lead instead of just mentioning her training and that she worked undercover for the FBI. I felt so much pain for Roberto because of his loss at the beginning but he put that on the back burner to become a specialized operative as a member of the Delta Force.

I am not giving out details because there sre enough released in the synopsis/blurb for this story. Just know that there is passion, romance and hot sexual interludes within. Finding love with the right person is such a pivotal moment in our lives and I am glad to see that this story tells it in such a way that you can become one with the action held within.

You have subscribed to alerts for P.T. Macias.

You have been added to P.T. Macias's favorite list.

You can also sign-up to receive email notifications whenever P.T. Macias releases a new book.