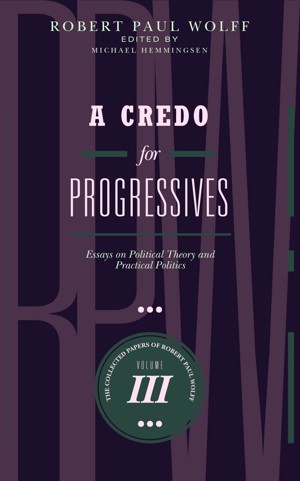 A Credo for Progressives: Essays on Political Theory and Practical Politics

The first section of the volume consists of seven selections of a general theoretical nature, including the essay "On Violence" that foreshadowed Wolff's classic work, In Defense of Anarchism. Three of these: "The Concept of Community," "The Indexing Problem," and "Who Owns Our National Story" have until now not been available in print.

The second section of the volume contains ten pieces written about specific people or for specific occasions. These include Wolff's important refutation of the first version of John Rawls' theory of justice, a touching personal reminiscence of his departed friend, Herbert Marcuse, a sharp critique of the reaction of the University of Massachusetts to the arrival on campus of Minister Louis Farrakhan, and several memoranda written for a graduate seminar Wolff taught on ideological critique.

The third section contains a selection of writings of an immediate practical nature on issues with which Wolff has been deeply involved. The volume closes with a photocopy of a handwritten document in which we see Wolff working out, first hand, an issue of great importance for those who continue to hope for a socialist transformation of capitalism.

Robert Paul Wolff received a doctorate in Philosophy from Harvard University in 1957. He has taught at Harvard, the University of Chicago, Columbia University, and the University of Massachusetts, where he has been a faculty member since 1971. He has published twenty-one books on the history of modern philosophy, social and political philosophy, the philosophy of education, economics, and Afro-American Studies. Among his best-known books are Kant's Theory of Mental Activity and In Defense of Anarchism, which has just been translated into Croatian, Korean, and Malaysian. In 1992, he was invited to join the W. E. B. Du Bois Department of Afro-American Studies to assist in the establishment of a doctoral program, which he has coordinated since it was established in 1996. Wolff is now the director of the new university- wide Program for Undergraduate Mentoring and Achievement which provides mentoring and instructional services to traditionally underrepresented students in their first year at UMass. In 2005 Wolff published Autobiography of an Ex-White Man, a meditation on the experience of joining an Afro-American Studies Department and what it taught him about America. In 1990, Wolff founded University Scholarships for South African Students, a charitable organization that offers financial aid to poor Black students studying at South Africa's historically Black universities and technikons.

Also in Series: The Collected Papers of Robert Paul Wolff

You have subscribed to alerts for Robert Paul Wolff.

You have been added to Robert Paul Wolff's favorite list.

You can also sign-up to receive email notifications whenever Robert Paul Wolff releases a new book.