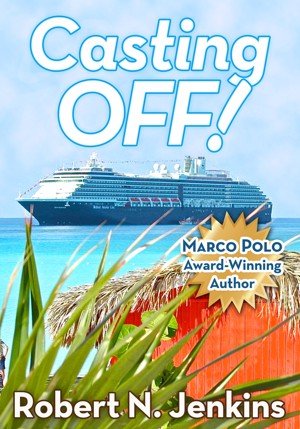 Many of those trips were three-night ”cruises to nowhere’’, when a new vessel heads a few dozen miles offshore into the Atlantic so that it can be sampled by thousands of travel agents and a handful of reporters.

But Jenkins also toured ships still being built, in three European nations. He spent four days amid the wildlife and scenery of Alaska’s Prince William Sound, in a ship so basic that the toilet was in the shower stall.

Yet on another voyage he crossed the Atlantic on the near-legendary ocean liner Queen Elizabeth 2 – in Casting Off, you’ll read about his onboard encounters with a movie star, an aromatherapist and a dodgy lothario.

Twice, he sailed on dozen-day voyages around the Mediterranean. Jenkins also spent a week cruising from Colombia to Florida, and another week between Athens and Istanbul.

He transited the Panama Canal twice – that report also is in Casting Off. But unlike the tens of thousands of passengers who annually book aboard a ship just for this experience, Jenkins brings you to the ship’s bridge and alongside the canal pilot directing the vessel.

The award-winning writer also recounts his trip aboard the “mail boat’’ serving the islands of the Bahamas. A newly met fellow passenger woke him before dawn to proudly point out various islands, mere lumps in the darkness, dotted by a few streetlights.

Wander with Jenkins around the decks of an authentic, steam-driven paddlewheeler on the Mississippi, in a flotilla of similar anachronisms.

And you’ll climb with the author into the crow’s nest 66 feet above the deck of a four-masted schooner, gliding through the Pacific off Costa Rica.

The articles in Casting Off also offer potential cruise consumers tips on how to find a ticket that is far cheaper than those bought by most of the passengers on the same voyage, why you might prefer a no-frills ship to a luxury liner, even how to decipher the cheery descriptions of shore excursions the cruise lines seek to sell.

Reviews of Casting Off! by Robert N. Jenkins