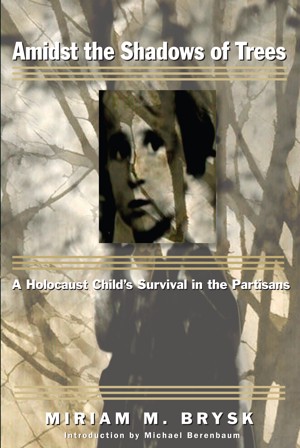 Amidst the Shadows of Trees: A Holocaust Child’s Survival in the Partisans

Miriam M. Brysk is a Holocaust child survivor from Warsaw, Poland. She was interned in the Lida ghetto in Belarus, then escaped with her parents and joined the nearby partisans in the Lipiczany forest. She came to America in 1947 with no previous formal education, yet went on to obtain her Ph.D. from Columbia University, and had a career as a scientist and medical school professor. After retiring, she became an artist and writer depicting the plight of the Jews during the Holocaust. She has created three major art exhibits: In a Confined Silence in 2005 (partially funded by a grant the WK Kellogg Foundation), Children of the Holocaust in 2008 and Scroll of Remembrance in 2013. She has had some 25 solo exhibits. Three of her works are part of the permanent art collection at Yad Vashem, and one is included in a book published by the museum in 2010— Virtues of Memory: Six Decades of Survivors

You have subscribed to alerts for Miriam M. Brysk.

You have been added to Miriam M. Brysk's favorite list.

You can also sign-up to receive email notifications whenever Miriam M. Brysk releases a new book.