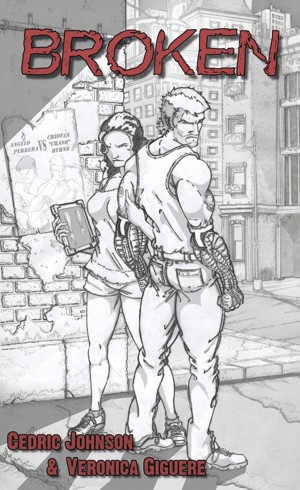 By Stacey Johnson
Criofan Byrne and Miranda Garren come from two different worlds, but they are thrust together by a ruthless gang leader who forces Criofan into an experimental cybernetics procedure, turning a medical breakthrough into a tool of violence for his own ends. Only together can Criofan and Miranda escape him. More
The city of Charlton is a city divided: Upper Charlton, where the rich and powerful work and play, and Charlton Terrace, where the poor are kept from crossing the ever-widening economic gap by corporate dynasties controlling the flow of capital, their security firms controlling the city police, and numerous gangs controlling the streets.
Miranda Garren has a chance of escaping the Terrace's oppression and making a new life for herself with the help of an old family friend and his plans for advanced medical technology. Criofan Byrne is the city's favorite son, champion of the local boxing circuit and heir to a corporate empire. Their separate worlds are brought together and destroyed around them in a single night by the leader of the Cabezas de Muerte gang, who will stop at nothing in order to make a name for himself in Upper Charlton.
Forced into using the experimental prosthetic technology Miranda had been working on, Criofan must put aside everything he knew of his privileged existence and work with Miranda. Together, they must find a way to escape the machinations of the cruel, vindictive gang leader, the life he's thrust them into, each other and themselves—and reclaim control of what remains of their lives.
Available ebook formats: epub mobi pdf rtf lrf pdb txt html
First 15% Sample: epub mobi (Kindle) lrf more Online Reader
pdb
Price: $4.99 USD
Buy Add to Library Give as a Gift
How gifting works
Create Widget
Tags: cyberpunk boxing veronica giguere cedric johnson
About Stacey Johnson

Stacey Johnson was born and raised in Lincoln, NE, where she began writing short stories and poetry at an early age. While attending Lincoln Southeast High School, Stacey was a top-placing contributor, layout editor and senior year editor-in-chief of its multiple award-winning annual literary publication From the Depths.

Stacey's other works appear in Mercedes Lackey anthologies (under the name Cedric Johnson).

Stacey currently resides in Thornton, CO, where she continues to write while working with other forms of digital media, including 3D modeling and virtual world communications.

Reviews of Broken by Stacey Johnson

You have subscribed to alerts for Stacey Johnson.

You have been added to Stacey Johnson's favorite list.

You can also sign-up to receive email notifications whenever Stacey Johnson releases a new book.