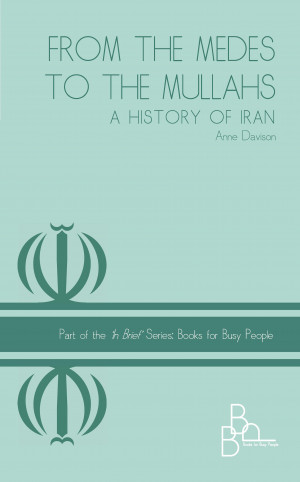 From The Medes to the Mullahs A History Of Iran

By Anne Davison
Rated 5.00/5 based on 2 reviews
This book offers an accessible, but comprehensive, introduction to the long and rich history of Iran. Starting around 600 bce it traces the main historical events finishing with the modern Islamic Republic of Iran. It would be of particular interest to the non-academic person who wants to understand a country that is frequently misunderstood. More
Mention of Iran may bring to mind images of turbaned Mullahs and nuclear weapons. On the other hand Persia may provoke other images; of Persian Gardens, romantic poetry or the beautiful wives of the last Pahlavi Shah.

But this in no way does justice to the people of Iran, or its rich and complex history. For much of the ancient period Iranian empires ruled vast areas from Afghanistan in the East to Egypt in the West. Starting around 600 BCE with the Medes and ending with the modern Islamic Republic of Iran this book traces the key events of this history.

It is aimed at the general reader who is looking for a short, accessible history of Iran. Rather than giving detailed accounts of particular events this book offers the big picture, an outline of the history. It is rather like building a house; starting with the frame, then dividing the interior into different rooms and finally putting the furniture in place.

Occasionally you will find events that may not perhaps be central to Iranian history, for example the Battle of Marathon or the meeting of Anthony and Cleopatra at Tarsus in modern Turkey. Such events have been included in order to enable the reader make links between what might be familiar within Western European history to that of Iran.

It is hoped that this book might provide an introduction to a complex country that is central to understanding the wider issues of the Middle East today.

Canon Doctor Anne Davison has had a lifelong interest in history and the religions of the world. Her journey into understanding other cultures began in her early 20s when she lived in Lagos, Nigeria. Later, a job with British Airways gave her the chance to travel the world more widely.

When she became aware of a global increase in religious intolerance she felt the need to better understand our world, past and present. She was particularly interested in how ‘religion’ interacts with politics. This led her to study for a Degree in History and Comparative religion, followed by a PhD in inter religious relations.

Whilst living in Switzerland in the 1990s Anne took on the role of Vice Moderator of the World Council of Churches in Geneva, before moving back to London to work with the Church of England as an Adviser in Inter Religious Relations.

In addition to organising pilgrim groups to Israel and Lebanon, Anne co-ordinated a Youth Exchange Programme for 16 to 18 year- old Jews, Christians and Muslims between Jerusalem and East London. In recognition of her work in inter-religious relations Anne was made a Lay Canon of the Church of England.

It was in response to people asking for her lecture notes, that in 2013 Anne decided to write her first book: From the Medes to the Mullah: A History of Iran. She has just published her ninth book on A History of China.

She remains convinced that many of the problems facing the world today are the result of an ignorance that can lead to intolerance at best and hatred at worst.

She firmly believes that one way to combat this ignorance is to promote a better understanding of our diverse world. Anne likes to think that by offering lectures and writing short, accessible books, she is playing her part in a small way.

Also in Series: In Brief

If you're looking for an easily accessible quick read about this important part of the world ... this is it, an historical overview of a significant country taking us right up until the present day. This is a must read for anyone wishing to understand Iran.

Iran is gaining greater prominence by the day on the world scene. To understand why you need to know where present Iran came from. Then to have a clear and accurate account of that history is a must. And if you are a busy man/women like many of us are, the book to read is that short but complete history of Iran by Dr. Anne Davison "From the Medes to the Mullahs". Enjoy it as I did.

You have subscribed to alerts for Anne Davison.

You have been added to Anne Davison's favorite list.

You can also sign-up to receive email notifications whenever Anne Davison releases a new book.