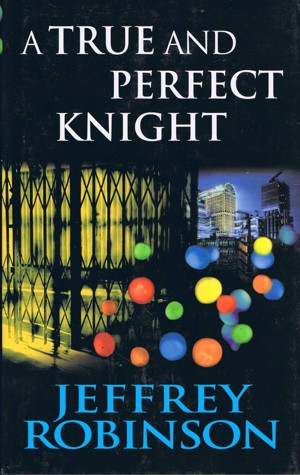 A True and Perfect Knight

By Jeffrey Robinson
With warmth, humor and his unique eye for life’s absurdities, Jeffrey Robinson turns one man’s adventure in the real world into the “feel good” novel of the year. More
KC Doone was a Wall Street trader (it’s what he did best), with a beautiful younger wife (so what if she was number 3), a slightly tipsy mother (if nothing else, she was out of his way, living in Florida) and a constant supply of M&Ms (because he really liked M&Ms).

The way he looked at it, he had life knocked.

At least he thought he did until that Monday morning when, all of a sudden, life bit back

Before the morning was over, he lost his job (there was something suspicious going on), discovered his wife in bed with her personal trainer (this was not what he thought personal training was supposed to be about) and learned that his mother was about to get thrown out of her tiny apartment (by one of the world’s richest men.)

Before the day was done, K. C. Doone also learned that, sometimes, even confirmed cowards have to fight back.

It took a goulash dinner to show him how he could earn a living, an unforgettable cast of misfits to help him don his suit of armor, a defrosted laptop to point him in the right direction, a Grand Tour of Europe to seek out the elusive Sir Tommy Whitestone, a mis-dialed phone number with a mysterious woman on the other end to give him the courage to go on, and a faulty elevator in London to change his life forever.
Available ebook formats: epub mobi pdf rtf lrf pdb txt html
First 5% Sample: Online Reader
Price: $2.99 USD
Buy Add to Library Give as a Gift
How gifting works
Create Widget
Tags: romance humor wall street day trading mms
About Jeffrey Robinson