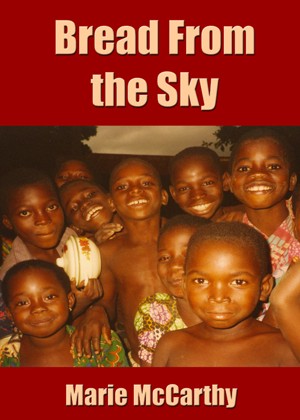 Bread From the Sky

By Marie McCarthy
Rated 5.00/5 based on 2 reviews
How many cat heads do you have to eat before you acquire the characteristics of a cat? Why do you hang a snail shell in a tree? How do you get a curse removed? And who buried a gri-gri in the yard? These and other questions are answered in Bread From the Sky, a Peace Corps memoir. More
Wanting a career change and armed with a graduate degree in international studies, a woman in her mid-40s leaves her divorce and ordinary life behind for a two-year stint as a Peace Corps Volunteer in Togo, West Africa.

She learns survival skills in order to live without electricity or plumbing like the rest of the people in her adopted village. She also gains language skills as, in addition to French, which is still the official language, there are over half a dozen local languages in common use at her village. Adjusting to a new culture, several different languages and some very old attitudes is sometimes difficult, frustrating and funny.

There are friends to be made, foods to get used to, bureaucrats and insects to contend with, health issues to recover from and red tape to choke on. Dealing with people who want to rip her off, who harass her (sexually and otherwise) and who always want something from her isn’t easy. The challenges are offset by the warmth and friendship that was found along the way as well as some amazing adventures. As a wise man said to her, “Africa will change you, whether you want it to or not.”

Like countless others I'm passionate about travel, capturing images of my travels, and sharing stories of what I've seen and experienced. I enjoy and prefer solo travel.

Other interests are foreign languages and intercultural studies. I like to know what the culture in the country that I visit is about. I still make cultural mistakes when I travel, but respect and a smile go a long way to repairing any faux pas I may have made.

I received a Master's Degree in International Policy Studies from the Monterey Institute for International Studies (now Middleboro Institute) in 1996 and a B.A. in Economics from California State University (Sacramento).

From 1996-98 I was a Peace Corps Volunteer in Togo, West Africa. I still keep in touch with friends that I made during that time and have dreams of returning to spend more time in West Africa after I retire. Friends in India are eager for me to see them, and I return to India as often as I can. When not traveling, I live near Washington, DC. 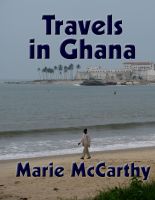 Reviews of Bread From the Sky by Marie McCarthy

I read this book last week and was captivated as soon as I started, well this book to me is not just a handful of memories, its much more than that, its a one in a lifetime of a life-changing experience. Even though it may just be based on a two year time period it successfully manages to depict the harsh, sort of unheard but truth of an impoverished country called ‘Togo’ which is in the western part of the African Continent.
At the age of 43 the Author travels to Africa as a volunteer for the Peace Corps (with other volunteers), where she has a great adventure, makes lot of friends and is loved by people wherever she goes, She’s helped by total strangers, She’s respected as sister and a daughter, Kids like her, Men want to marry her, people care for her, but wait there’s a catch !! It isn’t always so lovely and heavenly as it may sound, Life in Africa isn’t too easy especially for someone who is born and raised in the U.S where the standard of living is among the highest in the world including the Human Development Index, life in Africa is still very very primitive, Electricity and basic necessities like water taps are even beyond the leisure list, Mosquitoes are too many, Snakes and other venomous creatures can be very well lurking in the bush next to her house, Food doesn’t have much variety, and on top of that she has to deal with lazy and corrupt people for her work there as a Peace Corps Volunteer.

Even though this is a non-fictional book it is filled with characters some that I hated and some that I loved, it has its fair share of Happiness, Thrill, Sadness, Adventure, and many many funny moments, I really liked the book and that’s why maybe I tried to finish up at the first time I started reading it and I almost read it the whole night, I was so much hooked as the Journey throughout is so much captivating.


Recommended for everyone (17+) you’re bound to love it !

Thanks Marie McCarthy for sharing your beautiful memories and amazing experiences with us!

I was enthralled from the very first page of this compelling memoir about a woman's courageous two years in a world far-removed from her "normal" everyday life in the United States. Heart-warming, thought-provoking, and humorous, this book vividly describes the people, places, and cultural differences, as well as the shared human emotions she experienced during her stint in the Peace Corp in Togo. I felt her frustrations and laughed out loud, more than once! And, I admit to shedding a tear here and there. Her dedication to Wentarba still tugs at my heart strings. Once you start this book, you won't put it down.

You have subscribed to Smashwords Alerts new release notifications for Marie McCarthy.

You have been added to Marie McCarthy's favorite list.

You can also sign-up to receive email notifications whenever Marie McCarthy releases a new book.