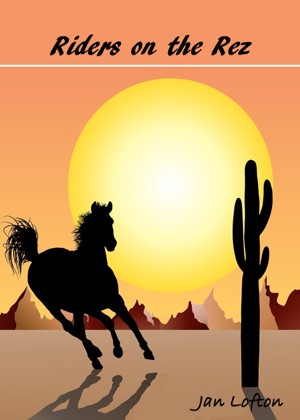 Riders on the Rez

By Jan Lofton
Rated 4.50/5 based on 2 reviews
Billy Tsosie meets his Navaho relatives for the 1st time ever but he is afraid he does not fit in. His Mom has never taught him Dine traditions and he thinks his older cousin Danny looks down on him because of it. But when Billy gets into a fight at the Kayenta Skateboard Park, it is Danny who comes to his rescue. With glossary of skate terms.

Free, in memory of Rex Meyer. More
Young skateboarder Billy Tsosie is quick to take on kids who tease him about his Native American heritage, and equally quick to jump into a fight with the kid who kicks his little cousin, Shawna.

When he interacts with his "rellies" on the Navajo reservation for the first time in his short life, he becomes proud of being Dine. Through the teaching of his older cousins, his uncles, great-grandmother, and Spiderwoman herself, he comes to understand the meaning of hozho, a Navajo term for "walking in beauty."
Download: epub mobi (Kindle) pdf more Online Reader
rtf lrf pdb txt
Price: Free! USD
Add to Library
Create Widget
Tags: native american myths arizona usmc skateboarding chapter book navajo military family spider woman small boys highlow reader book
About Jan Lofton

It was 2006 (or maybe it was 2007) when some irrelevant-to-this-story-things happened and I came to know myself as a writer. Not a writer as I had been: a proposal writer,technical writer, academic writer, but in the far more freeing sense of writing for my own enjoyment.

Judging by the children's books I wrote then my newly born inner author had a very happy childhood. As I crafted my small worlds I was reminded again of a mental image that I had carried with me for years, of the woman who sits at the loom that stands at the gate between the worlds, perpetually weaving this one into existence.

My Native American friends told me she was Spider Woman in their cultural myths, keeping us all entranced with the very never-endingness of her creations. When I began to think about a modern retelling of this myth, I thought it should be told as a girl's story, but Billy Tsosie, the hero of RIDERS ON THE REZ, took charge of the narrative right away and sent me off on a research quest to learn about Navajo language and customs.

Billy has grown up now, and is in pre-med at the University of Arizona (life moves much faster in fiction than in the flesh)and I have moved on to other stories and styles. I look forward to introducing them here on Smashwords as they are ready to be shared,

This may have been written for a child but I thouroughly enjoyed it myself. Only one thing wrong with it. It ended too soon. I eagerly look forward to more.

As a whole, I found “Riders on the Rez” to be a noteworthy story...

You have subscribed to alerts for Jan Lofton.

You have been added to Jan Lofton's favorite list.

You can also sign-up to receive email notifications whenever Jan Lofton releases a new book.