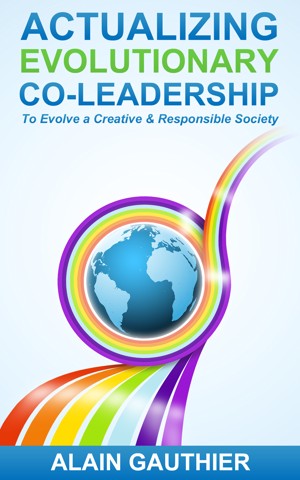 Actualizing Evolutionary Co-Leadership – To Evolve a Creative and Responsible Society

By Alain Gauthier
Why and how can evolutionary co-leadership accelerate the development of a creative and responsible society? After exploring the evolutionary worldview, the book invites the reader to discover the inner conditions for entering into a true partnering dance with others – for the common good. It then offers a wide array of proven practices to develop co-leadership and points to emerging initiatives. More
The book's theme is that evolutionary co-leadership is needed now to catalyze the emergence of a truly generative and wholesome society. A society where everyone is invited and supported to become a conscious, co-responsible co-creator – developing and expressing their unique gifts, while contributing to the evolution of humanity.

True leadership involves crossing a threshold that opens to the unknown – becoming an example for others in discovering and giving voice to new possibilities to explore and realize. Co-leadership opens a new space where an ensemble of people can jointly act as leaders and inspire others to do the same. To enter the dance of partnering with others – and with life itself – requires the embodiment of an evolutionary perspective. It involves awakening to both one’s singularity and deep connection to the whole, as well as demonstrating innocence (in the sense of not knowing), humility, presence, empathy, and courage. The practice of co-leadership both requires and develops these qualities. An inner dance with various aspects of one’s identity builds the foundation on which the external dance with others becomes possible, in a search for the common good.

Evolutionary co-leadership – to a much greater extent than individual leadership – allows the multiplication of creative actions in service of the whole. These actions will be crucial for accelerating the shift to a society that becomes more conscious of its responsibility for evolution. There is already evidence of this multiplying effect in communities and organizations around the world that span many sectors of society. The future is already here, although it is rarely portrayed in mainstream media.

The book invites the reader to reflect on two questions: What individual and collective choices can I make to act from an evolutionary co-leadership perspective and thus further catalyze and amplify that emergence? What can I learn from those who have already chosen that path, to find my own path as well as the support and challenge I need from others?

Alain Gauthier is an educator, consultant, and coach of executive teams and diverse partnerships on four continents. An HEC (Paris) graduate, Stanford MBA, and former McKinsey senior consultant, he is a co-founder of the Society for Organizational Learning (SoL) in the US and France, and has contributed to several collective books on leadership development and coaching.

"Alain Gauthier's insightful book on Evolutionary Co-Leadership is itself a marvelous demonstration of leadership in the realm of ideas. Gauthier's extensive experience and highly evolved yet practical perspective clearly shows the way forward toward more effective and moral leadership practices. I highly recommend this book for any one who feels the urge to live up to their potential and make a positive difference in the world."
– Steve McIntosh J.D., author of the books Evolution's Purpose and Integral Consciousness

“Alain Gauthier has written a short but ambitious book… that helps us discern the visible but still fragile emergence of partnership, source and driver of a new and indispensable second Renaissance. He does so by calling on his long and rich experience of practitioner and pioneer of collective intelligence, in close touch with the evolution of companies and other organizations. This is an inspiring, resourceful book for all of us – educators, entrepreneurs, and other builders of a second Renaissance – who are daily endeavoring to co-create an open, learning, innovative, and sustainable society.
– Jacques Chaize, company executive; Former President of the French Center for Young Executives; Author of the books The Quantum Leap – Tools for Managing Companies in the New Economy and The Door of Change Opens from the Inside.
Available ebook formats: epub mobi pdf rtf lrf pdb txt html
First 20% Sample: epub mobi (Kindle) lrf more Online Reader
pdb
Price: $10.00 USD
Buy Add to Library Give as a Gift
How gifting works
Create Widget
Tags: paradigm shift dialogue leadership development partnership discernment collaborative learning systems thinking actualization leadership coaching learning disciplines leadership evolution transformational leadership leadership qualities leadership definition leadership attributes leadership consulting leadership in education development of leadership integral philosophy evolutionary needs integral education evolutionary ethics coleadership collective leadership developmental practices integral practices partnering paradigm team coaching
About Alain Gauthier

Alain Gauthier is an international consultant, facilitator, coach, educator, and author who focuses his work on developing co-leadership and partnering capabilities in and across the private, public, and civil society sectors. He is passionate about integrating the inner and outer dimensions of change and leadership, both at the individual and collective levels, in the service of a new development paradigm.

A graduate from HEC (Paris), Stanford University MBA, and former senior consultant at McKinsey & Company, Alain is currently Executive Director of Core Leadership Development, and a principal of Metaintegral Associates in the San Francisco Bay Area. He also works in collaboration with Turning Point on leadership development and with In Principo on collaborative dynamics. Over the last 45 years, he has served a wide range of clients, from large American, European, and Japanese corporations to UN Agencies, global foundations, healthcare and educational systems, as well as other organizations in the for-profit and non-profit sectors.

Alain has designed and facilitated meetings on partnership capacity building in the United States, Europe, Japan, Brazil, and several African countries. He is a co-founder and active member of the Society for Organizational Learning (SoL) in the United States and in France, and a member of the Global Leadership Network. He has been a trustee of Pathways to Peace for more than a decade and is Vice President of the Club of Budapest in Paris.

Alain is the author of a book in French on evolutionary co-leadership that was published in March and will be available in English by the end of September. He has adapted and prefaced in French three of Peter Senge's acclaimed “Fifth Discipline” books, is a co-author of "Leadership is Global" and "Action Inquiry: The Secret of Timely and Transforming Leadership", and has contributed to three collective books on coaching and leadership development in French. He is a visiting professor for the Coaching/Personal Development Master’s Program at the Université Panthéon-Assas Paris II, and a course designer for the Giordano Bruno Globalshift University. He lives in the San Francisco Bay Area but spends more than 40% of his time outside of the United States.

You have subscribed to Smashwords Alerts new release notifications for Alain Gauthier.

You have been added to Alain Gauthier's favorite list.

You can also sign-up to receive email notifications whenever Alain Gauthier releases a new book.