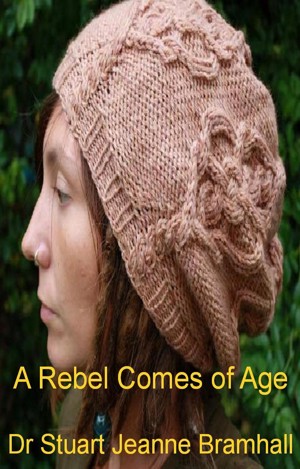 A Rebel Comes of Age

By Dr Stuart Jeanne Bramhall
Rated 4.00/5 based on 1 review
Inspired by Occupy Wall Street, seventeen-year-old Angela Jones and four other homeless teenagers occupy an empty commercial building owned by Bank of America. As they slowly transform it into a teen homeless shelter Ange goes into crisis mode when the other residents decide to use firearms to prevent the police from evicting them. Winner of 2014 Pinnacle Achievement Award. More
Seventeen-year-old heroine Angela Jones meets a nineteen-year-old activist named Fabio during the Occupy Wall Street protest in September 2011. Together with three other homeless teenagers, they “occupy” a vacant commercial building in Brooklyn’s disadvantaged Bedford-Stuyvesant neighborhood. Over the course of five months, they transform Freedom House into a teen homeless shelter.

When Bank of America obtains a court-ordered eviction notice, Fabio and the other teenagers decide to use automatic weapons to prevent the police from evicting them. Determined to stop the eviction by nonviolent means, Ange reaches out to the African American church across the street.

I'm a 66 year psychiatrist, single mother and activist who emigrated from Seattle to New Zealand in 2002. This followed fifteen years of intensive personal harassment by the U.S. government for my political activities. I write about this in my recent memoir The Most Revolutionary Act: Memoir of an American Refugee.

Also in Series: Battle for Tomorrow

Stuart Bramhall’s impeccably-researched new book, A Rebel Comes of Age, is a journey I never would have taken but was very glad I did.

i have never travelled so deeply into the world of the teenage homeless, and it was one that felt so real I was compelled to get up and brush my teeth or wash my hands every ten pages. Ms. Bramhall’s characters’ struggle to create a homeless shelter out of an abandoned bank building is passionate and deeply felt. I kept wondering if the author could have really been there, a fly on the wall, taking detailed notes, but I knew that wouldn’t have been acceptable to her characters, as they are militantly independent of most adults and outsiders. I was left with a feeling of awe at the author’s imagination, empathy, and ability to research the world of urban teen homelessness and the plight of young activists for the homeless.

I wholeheartedly recommend this book to anyone interested in the conflict between young people from disadvantaged backgrounds and corporate America. The book’s ideal readership would include those interested in fiction and non-fiction on this topic area, and anyone interested in the detailed workings of any of the Occupy movements and their offshoots and descendants. I myself have participated on the edges of various Occupy’s in Australia where I live, but had no real clue how they were organized and the internal forces that compelled them forward or compressed them into implosion. I finished the book feeling edified and thankful for the experience.

The pacing of the novel was measured and the threat of armed violence served well as a device to maintain tension throughout, all the way until “Zero Hour.” I also loved how Ms. Bramhall drew Ange’s surprise at receiving the passionate support of people like Reverend McLeod from the church across the street, and as a white American, I was also fascinated with the way Ange negotiated her various sticky issues involving race.

I recommend it also to those interested in a good gritty urban novel about a teenager learning her place in the world. My only reservations are that the author took much less care with the formatting than she did with her amazing narrative. There are also a few typos, though the writing quality of the book is of a high standard. Clear, precise, eloquent, erudite, if not always lyrical. I feel that one more pass by a good editor and formatting specialist would have given this book a much bigger audience. Then again, I have a feeling that the author’s target audience would not mind much, if they are as interested in substance over style as the author’s characters are, and, I’m guessing, as the author herself is. My only final reservation is that the author’s focus on the real and present world of her characters, and the huge cast of characters that come in and out of her story, both seem to come at the price of deeper character development of the protagonists Ange and Fabio, or any of the other central characters. I finished the book feeling as though I didn’t know Ange or Fabio as well as I could have. But as I devoured the book, I was so astounded and fascinated with the world they inhabit that I didn’t mind the lack of focus on the emotional complexities of the characters.

You have subscribed to alerts for Dr Stuart Jeanne Bramhall.

Would you like to favorite Dr Stuart Jeanne Bramhall?

You have been added to Dr Stuart Jeanne Bramhall's favorite list.