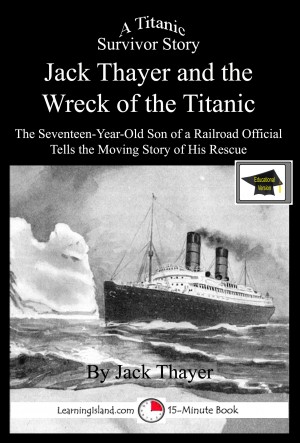 Jack Thayer and the Wreck of the Titanic: Educational Version

Jack Thayer was the son of a Pennsylvania Railroad official. He was 17 years old when he and his parents decided to sail from England to America on board the Titanic. This is his story of his rescue.

Caitlind Alexander is the author of over 60 books for children, including the Jamie and Kendall Broderick Mystery series, the Wonderful World of Animals series, the Miss Jones series, and a number of books in the 14 Fun Facts and 101 Fun Facts series.

Caitlind is also an accomplished speaker. She has given numerous talks to children and school classes. She also gives talks and seminars for writers on topics ranging from creating believable characters to publishing ebooks.

She lives in California where she loves to visit historic places and learn about new things. She also loves to travel and has been all over the world.

You have subscribed to alerts for LearningIsland.com.

You can also sign-up to receive email notifications whenever LearningIsland.com releases a new book.