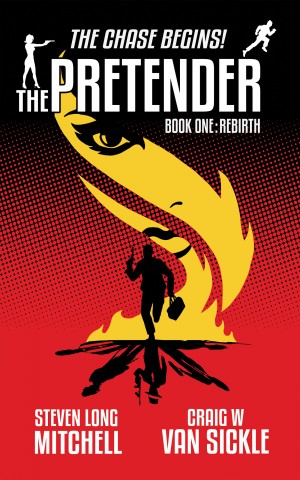 By Craig Van Sickle
& Steven Mitchell
Rated 5.00/5 based on 2 reviews
Based on the hit TV series, The Pretender - Rebirth is a mystery thriller about a brilliant human chameleon, who literally becomes anyone he wants to be (a surgeon, a pilot, a physicist) to defend those who can’t defend themselves. His only obstacle, staying one step ahead of his relentless pursuer from The Centre, the sexiest woman on the planet, the complex, bitch-on-wheels Miss Parker. More
There are Pretenders among us, geniuses with the ability to become anyone they want to be. In 1983 a corporation known as The Centre isolated a young Pretender named Jarod and exploited his genius for their ‘research. Then, one day, their Pretender ran away…

Written by the creators of the cult-hit TV show The Pretender – Rebirth is a slick mystery thriller about a brilliant human chameleon named Jarod who after escaping from the notorious Centre, plunges headlong into his newfound freedom. While also discovering the joys and intricacies of everyday life with the pure wonderment of the man/child he is, Jarod uses his unequaled abilities to literally become anyone he wants to be (a surgeon, a pilot, a physicist, etc.) as well as his dazzling mind over muscle vigilante-like skills to bring down the powerful and corrupt and protect those who can’t defend themselves.
All the while he must stay a step ahead of his relentless pursuers from The Centre.
First and foremost is the sexiest woman on the planet, the complex, bitch-on-wheels, Miss Parker who wants him recaptured at any cost – alive - preferably. Parker is a deliciously cunning woman Jarod has known since childhood and theirs is a truly multifaceted cat and mouse relationship - one driven by Jarod who holds the key to the emotional secrets at her very core, secrets that fuel her relentless drive to recapture him.
Then there is Sydney, Jarod’s surrogate father figure and psychologist who raised and nurtured his genius for The Centre’s disreputable purposes. To Jarod, Syd is both friend and foe, confidante and captor, counselor and betrayer. But Syd’s calm paternal connection to Jarod remains strong, often in conflict with The Centre agenda.
Jarod senses Sydney holds the emotional keys to his core – the truth about his past and the identity of the parents he was stolen from and whom he longs to reunite with.
In Rebirth, Jarod employs multiple sophisticated pretends in his quest to save one missing boy and hundreds of other innocent lives hanging in the balance at the hands of multi-national corporate terrorists and mercenaries.
Rebirth is at once an enthralling tale of one man’s exploration of life around him, intricate suspenseful mystery and intense edge-of-your-seat thrill ride – that captures and reignites the cult hit TV series for both loyal fans of the show and new readers alike.
There are Pretenders among us…
Available ebook formats: epub mobi pdf rtf lrf pdb html
First 20% Sample: epub mobi (Kindle) lrf more Online Reader
pdb
Price: $2.99 USD
Buy Add to Library Give as a Gift
How gifting works
Create Widget
Tags: tv series rebirth craig w van sickle steven long mitchell the pretender
About Craig Van Sickle

Steve Mitchell and Craig Van Sickle have written, produced and/or directed over two hundred hours of prime network programming including such series as Alien Nation, Murder She Wrote, Medical Investigation, 24 and NCIS. From situation comedy to drama, comic books to mystery, science fiction to action-adventure, their career has covered a broad imaginative spectrum. Together they have also created numerous television series, most notably, NBC's The Pretender on which they served as Executive Producers for its entire five-year run of episodes as well as a series of two-hour movies.
In addition to series television Mitchell and Van Sickle have also written and produced numerous long form productions -- both mini series and MOW's as well as feature films.
In 2008 they were nominated for an Emmy Award for Outstanding Mini-Series as the Writers/Executive Producers on Syfy Channel's, TinMan, an updated reimagining of The Wizard of Oz that, in addition to its critical acclaim, has broken ratings records both domestically and internationally.
In October of 2013 the team released their first novel, The Pretender-Rebirth and have just released the second novel in the series, The Pretender - Saving Luke, available now.
Both reside with their families in the Los Angeles area and can be contacted through their web site, ThePretenderLives.com.

Reviews of The Pretender-Rebirth by Craig Van Sickle & Steven Mitchell

The Pretender Lives on in the TV screens of our minds!

Well descriptive prose that plants clear images on the TV screen in my mind.

Rebirth is yet another FRESH and Original approach to story telling from the guys who brought us one of the
best and most original stories in recent history: The pretender.

In this book we are given a new FIRST LOOK into the imaginings of our favorite characters as we have never experienced before.

The same great story concept of The Pretender LIVES ON in Rebirth representing the best of all possible returns for the series. It is a novel that gives birth to a new story line, new legions of fans of the next generation as well as a new reflection of possibilities for older admirers.

For those of us who re-live its story through our own imaginings in a world of words, the message is clear: REBIRTH is a reboot of the creative process showing us how to nurture their child into reflecting those things
that had once been reflected onto us. As new found parents, lets make their grandparents proud!

I've been a fan of The Pretender since I watched the first episode, nearly thirteen years ago. After four TV seasons and two movies, it went into a forced hiatus ("NBC, where good shows go to die") until, finally, in 2013, the show's creators, Steven Long Mitchell and Craig Van Sickle got their rights back and decided to give (re)birth to this universe.

"The Pretender - Rebirth" does not continue from where we were left on "Island of the Haunted", it goes back to the beginning and even further than that. Forget the old universe, but not completely - it's all still there, only twenty years into the future.

Using the layout of the pilot episode as the basis for this novel, Steve and Craig managed to surprise me constantly by letting me think I knew what was coming. This is a story full of twists - some of which are from scenes we have already seen on screen, others are not.

The "twenty year push" works well and was necessary to bring the show closer to a new number of fans. Aside from the technological aspects of the story (Jarod using an iPad instead of his traditional red notebooks and the modernized SIM-lab), the biggest update here was in terms of character development. Before reading this novel, I've read some reviews complaining the poor characterizations present here. Well, not to criticize a critic, but who knows the characters better than the people who created them? The actors gave wonderful performances, but they could never go inside their character's mind the way Steve and Craig can.

No doubt, we were left stranded with no official original Pretender content for far too many years. Perhaps because of that, some people now tend to view some characterizations of a softer Miss Parker as being the right one (just to mention one example). Either that or they forgot all about how Miss Parker used to be at the beginning of the show.

Still on the subject of characters, be ready for some surprises. Most of the old faces are still here and the new ones have definitely earned the right for more development in the upcoming novels.

In sum, "The Pretender - Rebirth" sets the bar high for what is coming next. It is a good novel, with plenty of action, well-plotted and nicely written. Whether you're an old fan (I'm not really old, just 33) of the show or you know nothing about it, you'll have a good time reading it.

(reviewed 7 days after purchase)
Jacci O reviewed on Oct. 7, 2013
(no rating)
Like many, was incredibly excited to hear of the return of our beloved Pretender. Then was anxious about how it was to be achieved. There was much speculation about how to fill in the gap, where it would go, would it be the same Pretender that we all love? Admittedly, I approached this with some small trepidation and found that I was literally knocked out of my socks with how good it was.

The story was immediately engaging and all so familiar, and it spun out in my head as I was reading like an episode playing in my mind. The familiar faces and voices all there, and some new ones too, which I was surprised to find that I thoroughly enjoyed them!(which was most unexpected). Cleverly done to embrace old fans and welcome new, a little darker and edgier than the series now the limits of television production are no longer there. Despite initial misgivings, found myself dragged back into the Pretender Universe as easily as slipping in a DVD and just absolutely loved it!

Anxiously awaiting the next installment, even more greedy for more Pretender than ever before. Steven and Craig have done a wonderful job with this, re-igniting my love for the show and story more than ever before. It was like meeting up with old friends you haven't seen in ... well 12 years... and everything falls so naturally and you slip into that comfortable friendship immediately.

Loved the new bits of information and insight into the characters and their motivations and the plot line itself was fast paced and verrrrry interesting too. Cannot wait for the sequel.

Do yourself a favour and read this!

You have subscribed to Smashwords Alerts new release notifications for Craig Van Sickle.

You have been added to Craig Van Sickle's favorite list.

You can also sign-up to receive email notifications whenever Craig Van Sickle releases a new book.