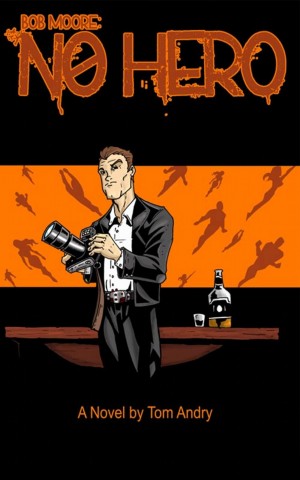 What People are saying about Bob Moore

"The most delicious "superhero" themed book I've read. The world is incredibly deep, believable, and realistic with it's own rules and terminology. The characters come alive and make you feel."

"This was quite an enjoyable read. When you cross a gritty gumshoe with spandex superheros, their two worlds collide in spectacular fashion."

"The book is fast and keeps your interest. This was the first book that as I approached the end, I started getting a feeling of dread that the end was coming up and at the same time I had to find out the finale. What an enjoyable sensation."

Tom Andry is the Associate Editor of Audioholics.com and host of the AV Rant podcast. He's been writing mostly reviews but has lately returned to his prose roots. He has written many unpublished short stories, poems, and a few screenplays that may still be produced. He's the father of three boys affectionately nicknamed Punkalicious, Captain Evil, and Neo. He's happily married and currently resides in Perth, Australia. His background is in drama, creative writing, and research psychology which basically means his kids are in for a pretty rough time. His wife, Tanel, doesn't have it so easy either.

Reviews of Bob Moore: No Hero by Tom Andry

Review
Kyle Timmermeyer reviewed on May 4, 2012

Excellent. The Incredibles for the crowd who likes their literature slightly grittier.

Great book!
Just the writing style I like - the ability to depict an entire world in few words, yet still conjure up a vivid picture in the reader's head. This left the author free to develop characters you really get in to.
My only reservation is that the final resolution came a bit too quickly. However, this is clearly the first in a series so there will be further development and time invested in the other characters (or so I hope).
And did I miss something glaringly obvious? Cos I can't understand why everyone thought it was odd that Bob Moore never changed his name (?).
I can't wait to read the second book!

Thoroughly enjoyable read! Well written, good pacing, I can see it as a new SyFy series. Thanks for an entertaining read.

Bob Moore is a private investigator with a select clientele - 'Super's',those with special powers who are a part of everyday society. He reluctantly takes on a case to investigate the alleged disappearance of Doc Arts patients despite the general skepticism and his dislike of the man. Just as Moore decides to quit he witnesses a gruesome death and Moore is determined to find the callous murderer.
Bob is a traditional PI in a nontraditional world and the juxtaposition is entertaining. As a 'tippy', an ordinary human, his job pits him against surveillance targets who have the ability to kill him without breaking a sweat. Bob uses a combination of his wits and some handy gadgets created by Ted (The Tinkerer) to do his job. However I was a little disappointed that Bob doesn't actually do a lot of investigating in this story, he hands out trackers and consults the Mind (a super computer) but solves the case by accident. In the Afterword, Andry explains that he could have stretched the book out by having Moore follow Doc Arts but regarded it as 'filler' where as I would regard it as crucial investigation. There are never any suspects or red herrings in play which are vital elements of a mystery. For me, the mystery fell flat because no-one else was invested in the outcome - no wrongly accused suspect, no one in imminent danger, no surviving victim needing closure - the victims were incidental. The story would have had more impact if the outcome threatened Bob personally, for example his ex-wife Gale or assistant Khan could have been at immediate risk if the mystery was not solved.
Despite the flawed mystery, Bob Moore: No Hero is an entertaining novella - the characters are appealing and the general premise is engaging. Offered for free download , it lends itself to a series and Andry has announced plans to release a full length Bob Moore novel in August, which I'd certainly be interested in reading.

In a world of super heroes, the real hero has no super powers at all... this is an enjoyable, humerous, fun-filled novel speculating on the downside of super hero proliferation.

I really liked this book. The story with a "normal" PI in a world of superheroes was great and very well written.

A thoroughly enjoyable book, I was struck by the fascinating premise of a normal PI in a world of people with super powers. It reminded me of a couple of favorite series, Jim Butcher's Dresden Files and George RR Martin's Wild Card universe.

This story seems to meld the elements of both into a new, and very entertaining storyline. I could see this becoming a series, with the protagonist working his way through new mysteries and fleshing out the world around him. The possibilities are endless!

Growing up, my reading time was divided between my love for science fiction (Robert Heinlein, Poul Anderson, Issac Asimov), comic books (Superman, Flash, Fantastic Four) and my mother's detective novels (Mickey Spillane, Rex Stout). Finally, the best of all my worlds have come together with Tom Andry's novel, Bob Moore: No Hero. Tom has merged what would be considered incompatible genres into a strong read and a great first effort. Yes, there are some cliches, but they add flavor and enhance the connections to the genres he has melded together. Characters and plot are well developed and entertaining, and the story moves along at a good pace. The main protagonists are all structured to move forward through a possible series of novels. I do know that Bob 2 (as Tom calls it) is well underway, and I for one am eagerly awaiting its release. This book has singlehandedly caused me to purchase both a dedicated e-book reader and a tablet. I'd like to thank Tom for giving me new reasons to buy geeky tech toys (not like I need reasons).

I really liked this and I very much hope there will be sequels.

Very fun and entertaining story. It's the first ebook I'm reading on my Samsung Galaxy S phone. And I love it. If you like anything with super hero's, then this is a a must read!!

You have subscribed to Smashwords Alerts new release notifications for Tom Andry.

You have been added to Tom Andry's favorite list.

You can also sign-up to receive email notifications whenever Tom Andry releases a new book.