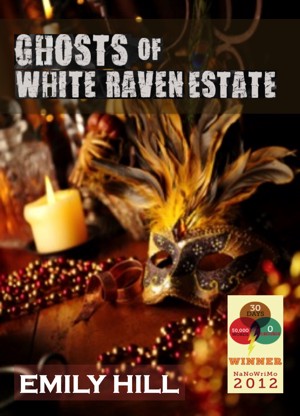 "Flying toward the Crescent City at that moment was the kind of storm that causes shutters to clatter, and the shadows of gnarled oaks to bob and weave across expansive lawns.

By midnight bolts of lightning will dance along darkened lanes, like skeletons frolicking at the undertaker's ball and wild dogs will howl at the sight of the full moon." More
a NaNoWriMo 2012 winner!

"Flying toward the Crescent City at that moment was the kind of storm that causes shutters to clatter, and the shadows of gnarled oaks to bob and weave across expansive lawns. By midnight bolts of lightning would be dancing along darkened lanes, like skeletons frolicking at the undertaker's ball."
~ ~ ~
Ghosts glide through the haunted hallways of White Raven Estate, where nearly all of the members of the wealthy Calais family have died following the Yellow Fever epidemic that swept New Orleans in 1853.

The frenzied drumbeats of Voodoo ceremonies shimmer over the city as slaves are bought and sold on the St. Ann Hotel slave block.

Father Vivenzio, an opportunistic New Orleans priest, with VERY close ties to New Orleans' Voodoo Community scurries back and forth from his parish to White Raven Estate where supernatural forces thwart his attempts at skimming the riches of the estate from the two surviving members of the Calais dynasty -- ingenue Victoria Calais and her French-Canadian grandmother.

Frustrated by his inability to gain control over his supernatural nemesis, and hounded by crows, and wild dogs that roam the cemetery across the street from the Calais' Garden District estate, the priest calls on Widow Paris - New Orleans' Mambo Queen.

Here's What Readers Are Saying about Emily Hill's writing:

Carrie Ann Lehain
Atmosphere AND Suspense . . . If you like your chills the old-fashioned way--more ghostly groans, less gore--this is the book for you.

J. McCormick
Emily Hill is a great writer. The stories . . . in this book are very well told . . . there are some stories that I wish would just continue because the plots are just that good. I can't wait to see what she does in the future.

Emily Hill is an author of many supernatural titles and the owner of A.V. Harrison Publishing of Edmonds, Washington.
Her first novel, 'Jenkins: Confederate Blockade Runner' [paperback] was published October 2010.

Known as 'The Ghost Chaser’s Daughter', Ms. Hill was brought up surrounded by her mother’s Ouija board sessions, flickering candles, and Tarot cards. Emily spent her youth in New Orleans frequenting palmistry parlors and has always had an intense awareness and respect for all that exists on the Other Side of the Grave.

Emily’s first ghost sighting occurred with she was seven years old. Being alone in her house, after her parents left for work, and as the apparition of her deceased grandfather roamed the house, made Emily forever aware of things that cannot be explained away in mainstream religious dogma, or on scientific terms.

With Voodoo Queen Marie Laveau ("Widow Paris") as her protagonist -- triangulated between an innocent ingenue and a less-than-innocent priest -- Ms. Hill weaves a wicked story of revenge with the revelry of Mardi Gras 1853 as the back drop. Spoiler alert: In the end Someone dies -- will it be The Priest, or The Voodoo Queen?

Pay a Visit to The Voodoo Queen of New Orleans
On the edge of the New Orleans swamps lives Widow Paris who rides the streets in a black carriage -- and sleeps with a cobra slithering its way along the rafters of her shanty. Come for A Visit ~ Stay for A Lifetime! 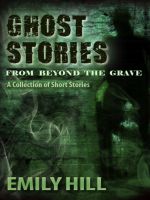 You have subscribed to alerts for Emily Hill.

You have been added to Emily Hill's favorite list.

You can also sign-up to receive email notifications whenever Emily Hill releases a new book.