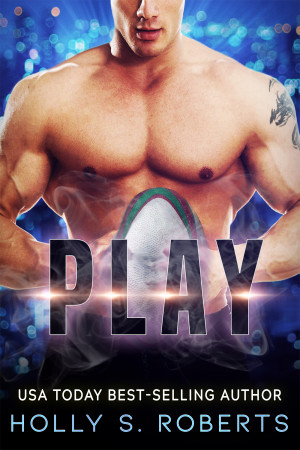 By Holly S. Roberts
Rated 4.50/5 based on 2 reviews
When Killian MacGregor, the hottest quarterback in the NFL, eyes the perfect pair of female legs, he spends an hour tracking the gorgeous woman in a room filled with rowdy teammates until one gets out of line.

Will Killian’s bad boy rep and Rebecca’s need for commitment, make this the most impossible PLAY of the season? Or, will Killian’s haunting past destroy the most important game of his life? More
When Killian MacGregor, the hottest quarterback in the NFL, eyes the perfect pair of female legs, he spends an hour tracking the gorgeous woman in a room filled with rowdy teammates until one gets out of line.

Rebecca Cavanaugh, a long distance runner for the state team, intimidates boys and men with her quick wit and majestic height. The pre-season jock party isn’t her scene, but she’s roped into attending to provide her sister a sober ride home.
Hiding in the kitchen to avoid the athletic sex fest, a drunken thug forces Rebecca to her knees, and waves a giant ding-dong in her face. Before Rebecca can extricate herself from the hairy situation, an unknown champion saves the night. When Killian assists Rebecca off the floor, she’s stunned into silence while staring at the sexiest man alive.

About the Series: A Completion Novel

Also in Series: A Completion Novel

Firstly this was my first book by Holly S. Roberts and I’m glad I found it as I love sports romances, especially well written.

When I first started reading, I was amazed by the brilliant start where you are thrown straight in there with a bang rather than a slow introduction. It had me gripped and intrigued to see where the author was going to go with the story. I admit, I expected this to be a typical strong sports star male and average girl and to a point it was but I also found the twist of Michael and that story actually helped give Killian a depth I didn’t truly expect. It was also intriguing to see Rebecca as an athlete in her own right but yet had body hang ups despite what you would expect of an athlete. Also, I was glad Rebecca was able to make a stand against Killian and challenge his thoughts and actions and didn't just instantly forgive him.


The story moved at a fast pace and definitely didn’t feel like it dragged out anywhere for too long, as with some books. Some characters such as Malory and Michael reinforced that issue of not to judge a book by it’s cover, although for very different reasons. The park scene with Killian and Michael was probably my favourite out of the whole book.

One scene did make me a bit uncomfortable and personally was on the edge for me in terms of how it was and that was when he forced her to her knees (won’t say anymore for spoiling it).

Personally, I like stories that have an epilogue and Play had a sweet epilogue which summed up any lingering questions and the small glimpse we got of Killian, Rebecca and Mikey was such a sweet HEA ending.

Overall, this was a nice read for something different and if you like hot and steamy sports romances with strong males, don’t hesitate to give this book a read.

You have subscribed to alerts for Holly S. Roberts.

You have been added to Holly S. Roberts's favorite list.

You can also sign-up to receive email notifications whenever Holly S. Roberts releases a new book.