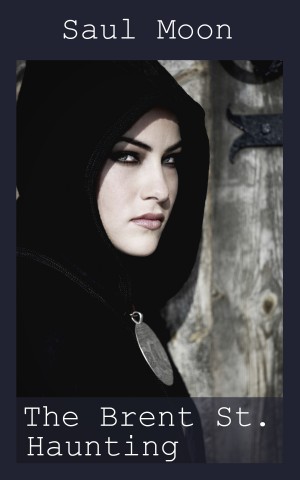 By Saul Moon
Bible teacher Evangeline Weekes lodges with the Andrews family at No. 1 Brent Street. When a violent poltergeist invades the property, adolescent chemical worker David Andrews is blamed.
But Evangeline is hiding a dark secret. When she murders a director of Albiston Chemicals, thousands are threatened by toxic gas escape.
Only Evangeline can stop a ghost of her past exacting a terrible revenge. More
Black magic, murder and mayhem descend upon sleepy Summerton...

Bible class teacher Evangeline Weekes is hiding a dark secret. Her past catches up with her when a mysterious African stranger arrives in town...

A violent poltergeist suddenly enters No.1 Brent Street, the home Evangeline shares with her landlord Frank Andrews and his family. Frank’s adolescent grandson David is suspected of being the agent through whom the demon is working. Things get much worse for David when inexplicable accidents start to happen at his workplace - a manufacturer of toxic gas.

Evangeline has formed a relationship with Tom Walker a teenaged boy of mixed race at the orphanage where she teaches. Tom and some of the other boys are being abused by a circle of rich and powerful men. Evangeline bides her time before unleashing a terrible vengeance.

But her murderous spree has repercussions. Already crippled by the demon, the factory is brought to the brink of disaster when Evangeline kills the safety director. Thousands of lives are threatened.

I write thrillers and mysteries, with a little bit of romance, of course.

The Scorpian Visitant is an epic fantasy / mystery novel in which sixties teenagers Robbie Higgins and Louise Carlton travel to medieval Oakwood to find the Death Stone of Izar. On their fantastic Odyssey they find love and the reality of their mysterious origins.

The Brent Street Haunting is my second novel and was published in October 2013. It is a paranormal story of revenge and murder. Mr. Coates a self-styled African witchdoctor is hell bent on getting even with those he sees responsible for his death, whilst Evangeline Weekes takes the law into her own hands to serve brutal justice on corrupt and predatory members of the establishment. Through one disadvantaged boy Coates and Evangeline are inextricably connected.

My third novel is set in the fictional Deep South city of Duisburg. It is a white knuckle ride of a thriller which finds the evil Mr. Coates in league with a sadistic killer of young women to bring his plans to fruition. Amy Simms is a junior reporter on The Duisburg Star and is obsessed with hunky businessman Jake Webster. Only trouble is Jake is married to her best friend. Amy and Jake ride a rollercoaster of sex, blackmail and murder to stand together against the monstrous Coates. The draft of Duisburg Star was completed early July 2013. I have put it away and expect to publish it in January 2014.

My fourth novel "Amanda" is drafted at 105k words. It a dark thriller about a female sex-killer who is relentlessly manipulated to do her half sister's dirty work. Expect this to be published in the Spring 2014. I am currently working on a sequel to Amanda.

Reviews of The Brent Street Haunting by Saul Moon

You have subscribed to alerts for Saul Moon.

You have been added to Saul Moon's favorite list.

You can also sign-up to receive email notifications whenever Saul Moon releases a new book.